The Tokyo 2020 Paralympic Games have come to a close and we’ve enjoyed 12 incredible days of action, emotion and medals. Team GB secured 124 medals in total with 41 of them being gold, and ranked second in the medal table.

Our writer, Emma Purcell, rounds up some of the Team GB highlights and winning moments at the Tokyo 2020 Paralympic Games.

Of course, the greatest story of the games is Sarah Storey. She has now become the most decorated British Paralympian of all time, securing 17 gold medals in eight Paralympic Games.

“I couldn’t have imagined going to eight Games, let alone winning medals at every Games, and 17 of those medals being gold,” said Storey.

It is the sweetest feeling to know that I go back to my room and there are a couple of gold medals in the safe to put this one with. That makes that tally very real then.”

There was more success in the cycling both in the velodrome and on the road with all athletes from British Cycling securing medals.

British Swimming had great success in the pool, winning 26 medals in total. One of the most decorated swimmers of the Paralympic Games was Reece Dunn, who competes in the S14 category, winning two golds, a silver and a bronze.

There were also medals for Hannah Russel, Tully Kearney, Stephen Clegg and debutant star Maisie Summers-Newton, plus many more.

There was also a memorable moment when Ellie Robinson gave a powerful and emotional post-race interview following her fifth-place finish in the S6 butterfly: 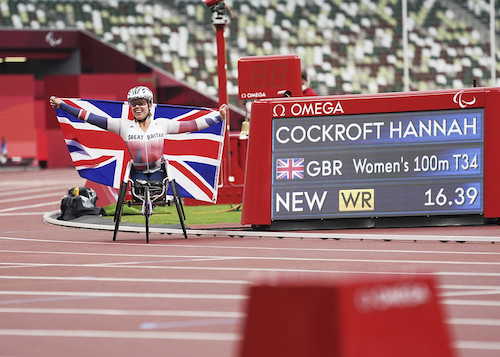 In the athletics it was all about Hannah Cockroft who stormed to double gold in the T34 100m and 800m, along with GB teammate Kare Adenegan winning silvers.

T53 wheelchair racer Sammy Kinghorn won bronze in the 100m sprint and then went up a gear to win silver in the 400m.

There was also a silver for Richard Whitehead in the T61 200m and bronzes for javelin thrower Hollie Arnold and discus thrower Dan Greaves.

However, he came back to secure silver in the 100m universal relay alongside Ali Smith, Nathan Maguire and Libby Clegg – who announced her retirement after she lost out on the T11 200m heats.

After only securing silver in Rio 2016, triathlete and Strictly star Lauren Steadman was aiming to go one step further in Tokyo. She certainly did, winning the gold in the PTS5 triathlon race, with teammate Claire Cashmore picking up bronze.

I was devastated after Rio, I was really destroyed, I didn’t go anywhere near my bike, my shoes or my swimsuit for seven months. My coach told me: ‘You’re not done yet and keeping going’. I put all my faith in him and he got me there.”

A Foxy crew on the water

Multiple medals were won for Team GB on the water at the Sea Forest Waterway. In the rowing, Laurence Whitley and Lauren Rowles won gold in the PR2 Mixed Double Sculls.

There was a second gold in the PR3 Mixed Coxed Four, which consistent of three debutants – Ellen Buttrick, Giedre Rakauskaite and Oliver Stanhope – and reigning Paralympic champion James Fox.

There was another gold for Laura Sugar in the Women’s Kayak Single 200m – KL3 and bronzes for Jeanette Chippington, Stuart Wood and Robert Oliver.

History was made in the wheelchair rugby where Team GB won their first ever Paralympic gold medal. The British squad defeated United States 54-49 in the final to secure the title.

“We have been used to going home disappointed so that’s what it makes it better. We’ve had a lot of disappointments, but those last two games were incredible,” said co-captain Chris Ryan.

“We knew we were good, but we had never got over that hurdle in a major event. It’s unbelievable – they’re getting better. It really is quite incredible.”

Boccia is one of two sports that is only played at the Paralympics. It is a type of bowls where athletes with severe physical impairments – such as cerebral palsy and muscular dystrophy – try to throw or roll balls as close to the jack as possible.

David Smith is BC1 world number one and successfully defended his Paralympic title in Tokyo against Malaysian player Chew Wei Lun in a tense and thrilling 4-2 victory.

Following the win, he said: “There are a lot of things going on in my head at the moment, becoming the first BC1 to defend a Paralympic title and becoming the most successful British player of all-time.

You try not to think about it but it does matter, I do care about stuff like that.

This is such a great sport and I just feel we are getting the recognition we deserve here, that makes me feel a bit emotional.”

David also had the privilege of being Team GB’s flag bearer at the Paralympic closing ceremony.

The Great Britain equestrian team had great success dancing their way to eight excellent medals with their young herd of horses.

Sir Lee Pearson won three golds in Tokyo, which makes him the third most decorated British Paralympian with an incredible 14 golds in total.

He won two in the Individual Test and Freestyle and the third was the Team Test, which he won with Sophie Wells and Natasha Baker.

Debutant Georgia Wilson was only selected to compete in Tokyo two weeks before the Games began after Sophie Christiansen pulled out after her horse had a minor injury.

Georgia had a tremendous first Paralympic Games, winning bronze in her Individual Test and Freestyle.

Taekwondo is one of two sports to feature for the first time at the Paralympic Games and two British athletes came away with medals.

Beth Munro, who only took up the sport in 2019, won silver in the Women K44 -58kg category, losing to Denmark’s Lisa Gjessing in the final.

“The journey that I’ve been on has been so short so to come away with a silver medal as a Paralympian – I’m on cloud nine,” she said.

I probably haven’t let it sink in until properly now. It’s been such a fast-paced journey. The fact I’ve won a medal, I’ve got goosebumps, the fact that I’m actually here.

Amy Truesdale secured a bronze in the Women’s K44 +58kg at her Paralympic debut too.

Badminton is the second new sport at the Paralympics and Team GB had two medal winning players on court.

Dan Bethell’s dreams came true after winning ParalympicsGB’s very first badminton medal with silver in the men’s SL3 singles. He missed out on the gold after being beaten by India’s Pramod Bhagat in the final.

“It’s amazing. I’m so happy with this week; it was my dream to win a Paralympic medal and to do that, it’s just fantastic,” he said.

I really wanted to win gold but all credit to Pramod, he played an amazing game, the variety of his attack was devastating and he kept at it the whole time, he deserved to win.”

So, they are just some of the amazing highlights of Team GB’s success at the rescheduled Tokyo 2020 Paralympic Games. What were your favourite moments of the Games? Share your best bits in the comments box or on Facebook and Twitter @Dhorizons.

You can also check out our interviews with 15 exceptional Paralympians we published prior to Tokyo 2020. We’ll also aim to speak to more athletes from Team GB over the next few weeks and months to discuss their success stories.

Will the lack of dedicated disabled sports clubs stifle the development of future Paralympic stars?

Disability inclusion: should the Olympics and Paralympics be merged?

Will the lack of dedicated disabled sports clubs stifle the development of future Paralympic stars?

Disability inclusion: should the Olympics and Paralympics be merged?