Alexa Huth, who is visually impaired, is an expat who moved to Japan from the US. She tells us about the obstacles she has faced, the amazing experiences she has had, and her adventures travelling around Korea and Beijing.

I never had any intention of moving to Japan, but I feel lucky that I landed here. When I was 22 I found out that I had lattice degeneration, and that my retinas were pretty much wrecked. Over the next few years the doctors reconstructed a fair amount of my sight, and eventually I was cleared to move abroad.

After getting the go-ahead, I spent my evenings on LinkedIn applying for jobs in a different countries. A company in Japan made me the best offer, and so, within a few months, I had sold almost everything I owned and moved to Fukuoka.

It didn’t have to be that fast, I could have taken my time. But, the nagging fear that my retinas wouldn’t hold pretty much drove me to take the leap.

The obstacles I face

The biggest concern I had when moving to Japan was how I’d handle medical care. Before I left, my optometrist gave me a year’s worth of contacts and printed out my prescription information. My US eye surgeon found a qualified surgeon in Tokyo that I could visit if things got dicey, and honestly, that was pretty much the extent of my preparation. I just packed my eye patches, and headed off.

Thankfully, I found an English speaking ophthalmologist through the US Embassy’s website. They had a list of doctors in various fields, and I only had to call one or two before I found my current doctor.

While the assistants don’t speak English, they do have a ‘process book’ that we use to communicate. It will say an instruction in English and Japanese, and they will point to which one they want me to do. Things like “take out your contacts” or “please point to the way the E is facing: up, right, left, or down.” Thankfully, I can read out of my left eye, otherwise I would have had to bring a friend to every appointment to read for me.

During my first appointment, I paid really close attention to what my new ophthalmologist was doing, just to make sure he was running the right tests. Since I’d been through them dozens of times, I knew the drill. At the end of my appointment I felt comfortable that he knew what my condition was. He even congratulated me on being able to see at all given the state of my retinas. I’m still proud about that, however sad it might sound.

The other big concern I had when moving here was whether or not I should tell my work about my impairment. I wasn’t sure what the laws are regarding disabled employees in Japan, and I was worried what their reaction would be if I told them I was visually impaired. It is particularly difficult to know and defend your rights when you don’t speak the language.

At my first job, I stayed quiet about it because I didn’t know enough about the country. But I started working for a new company about a year ago, and I told them. They’ve been extremely supportive, and do little things for me without me even having to ask, such as increasing the font size on the computer screen.

The wonders of living in Japan

Now that the negatives are out of the way, we can focus on the good parts. Japan is extremely easy for me to get around. I live by patterns and order, and Japanese society is extremely organised. Everything, from where to stand on an escalator to train schedules, work exactly as you would expect them to, day in and day out. This gave me a lot of my confidence back. I learned that I could be independent here and not have to rely on my family and friends to help me navigate through cities.

Another wonderful thing about Fukuoka is the treatment of blind people. Now, as I said, I don’t speak Japanese, so I can’t comment on the social treatment. But the public reaction is extremely accepting.

Fukuoka has immaculate yellow patterned paths to guide canes. Along these paths are grooves for the canes, and dots where you are approaching a curb or intersection. Every crossing plays a song when you can cross, so you never have to wonder if it is time to go.

We also have a beautiful park with a track that wraps around a lake for joggers. It’s not uncommon to see blind joggers paired with sited runners, both sides holding a rope so they stay together. It’s little things like this that make me feel more comfortable about living here with vision issues.

Traveling around Korea and Beijing

I’ve always wanted to experience new cultures, so as well as moving to another country, I have been travelling a number of times. I recently travelled around Korea and Beijing in China. Here’s what I found great, and not so great, about travelling there with a visual impairment.

I would have to say that Korea’s insanely simple taxi system really helped me out. It’s inexpensive to take a taxi and super-fast to hail one. Taking a cab also cuts down on the stress of getting around, and makes it quick to visit multiple places every day.

I also found some wonderful bus tours that will take you everywhere, and the guides speak excellent English. I told my guide that I couldn’t see very well, and she was really considerate. It may have been part of the standard tour (I don’t know) but she even took the time to explain the life of Buddha murals in great detail so I didn’t miss a thing. 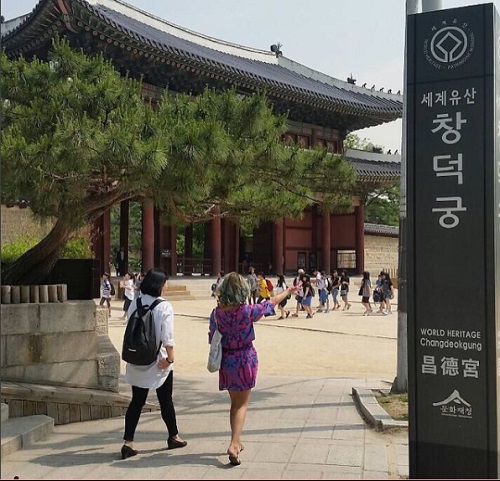 I hate to say it, but Beijing was a big disappointment. It was one of the most stressful places I have ever been to as a visually impaired person. The traffic was horrible and the traffic laws seemed to be totally optional. It left me feeling vulnerable and scared every time I needed to cross the street.

While they had the yellow blind cane tracks, like in Japan, the tracks were not maintained from what I could tell. I even saw one that just ran into a wall. More than anything though, there wasn’t much personal space. Everyone bumped and jostled me, especially on public transportation. While I understand that there is a big population to pack into one city, Beijing left me feeling exhausted and frustrated.

The good
Despite the negatives, the public transportation in Beijing was also a huge help. I was able to easily get around the entire city using the underground subway. It gave me a break from the traffic of the city, and gave me the freedom to visit sights that were a bit further away from my hotel. I was able to take the subway to the summer palace without any problem.
I also found enough English speakers in both Beijing and Seoul that I could ask questions if I was extremely lost. I was pleasantly surprised when I realised I was much closer to my hotel than I thought. Asking at a local restaurant potentially saved me hours of wandering around trying to figure out where I was on the map.

Like traveling in any foreign country, the language barrier can be extremely tough. My problem isn’t very visible, so if I need help, it takes a lot of explaining. Even wearing an eye patch doesn’t seem to be a signal that something is wrong.

Instead, I felt like it is mostly ignored or regarded as a fashion statement. I’d therefore advise getting a translator app on your phone, or having something short about your visual impairment written in the native language of the country you will be visiting. That way, if you get stuck, at least you have a shot at being understood.

Being a visually impaired expat has made given me a lot more confidence about my abilities. It’s kind of like being thrown in a lake and told to swim. I knew so little when I came here that I couldn’t really dwell on my disability as much as I did when I lived in an environment that I understood.

As well as her day job, Alexa blogs for www.userway.org, a website that helps improve online accessibility for visually impaired people.

Download our FREE guide to finding an accessible house, in partnership with @BranchProps. Whether you're renting or buying, it will help you to find your dream home. https://disabilityhorizons.com/2020/07/accessible-housing-download-your-free-guide-to-finding-an-accessible-home/

We're working with @LeonardCheshire to find out the scale of the problem with disability hate crime in public & online, particularly since the lockdown. Take our survey to make your voice heard. https://disabilityhorizons.typeform.com/to/qSFal8mC