Amputee, Mark Pattenden, recently undertook an extraordinary challenge to drive through 14 capitals across Europe in 14 days in order to raise money for BLESMA. Having heard about the preparations for his trip, he now tells us how his epic journey began…

18 September 2011 and our local pub was getting busy as more people arrived to see us off. Our journey started at 3pm with a drive down to Dover for the crossing to Calais, where we began our drive to Brussels, the first city in the 14in14 challenge. We had a tracker system fitted to the car for people wishing to follow our progress, something that was particularly useful as we planned to take off-road routes.

After approximately 250 miles of clear roads, and in the middle of the night, we arrived to a very busy Brussels city centre. It was already dawning on me how many hours I was going to be sat in the car seat driving, much more than it would have been if we had chosen to take the most direct routes via motorways, although at least that way we could avoid tolls.

We stayed in Brussels for about 2 hours to stretch our legs and have a bite to eat before setting onto the next stage; Brussels to Amsterdam. I had made a point, before setting out, to do a routine vehicle check at each capital to ensure that we spotted and fixed any early signs of failure, rather than wait for something to go wrong whilst travelling.

We decided to get the second leg out of the way as soon as possible as, come Monday morning, Brussels was going to become very busy. The good thing about having done so much research is that you quickly learn – from all those who have gone before you – the quirky issues to avoid. Simple tips, like knowing when lorries do not travel in Europe, can help you to plot less busy routes, and allow you to get where you want to be with a minimum of fuss.

The journey to Amsterdam seemed to take a lot longer than originally planned. I was beginning to feel a bit tired having been awake the best part of 24 hours, and having consulted with maps along the route. On reflection I had taken a wrong road somewhere and ended up near what looked like a forest. This problem was easily rectified by planning a slightly different route, albeit 50 miles off the original route.

A friend in Germany had invited us to stay at his house for the night, and although this was slightly out of the way, a rest was essential. Driving through the night is far easier than driving during the day, but when you are tired and just need to sleep, distance and time can play tricks on your mind. Eventually at 9pm we arrived at our friend’s house, and after a brief chat and 3 hours of sleep, we woke to the smell of home cooked food; heavenly. We were now on day 2 of the challenge and having refreshed ourselves it was time to say our goodbyes and hit the road towards Copenhagen.

Driving along off-road routes really opened our eyes to the different cultures, taking in different sightings and discovering how each country had its own unique influences. In Germany we found painted horses in fields, much like the white figures we have have dotted around England, and signs dedicated to the locals. We drove through forestry commission land, another benefit of driving off the beaten track. Stopping to look at maps gave us an opportunity to take in the views and smells of the area.

Making our way north to the Great Belt Bridge that crosses from the west of mainland Europe to eastearn Denmark, meant having to make a detour again. We originally intended to take a boat across the Baltic Sea but, when we arrived there, there was no crossing until the morning, which was 6 hours away. I recommend taking the bridge as it is a feat of engineering genius spanning some 18km long with an island in the middle, Sprogø. The island is now a protected area, but from 1922 to 1961 the main buildings on it served as a home for unmarried mothers and young women who did not fit into the norms of society at the time. Today however, Sprogø is uninhabited and has a rich animal life, including a rare green toad and a number of bird species. The sights travelling across the bridge are amazing and we were lucky to have a clear view in all directions, well worth crossing for the experience.

Eventually arriving in Copenhagen, we were plunged into chaos as the city was hosting the UCI World Cycling Championship and we had arrived bang smack in the middle of it. We were then misguided into the main starting point for the race and TV central holding area; we can only assume they must have thought our car was part of the championship with all its livery on it. Although a brilliant experience being so central to the event, we needed to get out before it started, as we couldn’t afford to be caught up and delayed by a whole day.

Leaving Copenhagen was straight forward as most of the roads heading east were open and didn’t form part of the course for the championship. As we headed for the coastal port (which we knew would place us at the base of Sweden, or Kingdom of Sweden as it is officially known), we had an opportunity for a short rest and to enjoy the views. We could have carried on slightly further south and crossed the Øresund Bridge, but this would have been a more expensive crossing point and into Malmo, which is a busy main area of Sweden that we needed to avoid as we headed to Stockholm.

The route north to Stockholm was some 370 miles, of which most was forest with dotted signs warning us of moose. Unfortunately we never saw any, but we were on the lookout as we had never seen one in the wild. The smell of pine filled the air as we watched many vehicles storming along the motorway, which ran next to our route. We didn’t want to miss any countryside and the local inhabitants of it.

By the time we reached Stockholm it was early evening. As darkness fell on the city, it changed into a vibrant colourful place. We had arranged to meet with a guide of sorts, Klas Aberg, a serving member of the Swedish Army. We followed Klas to the waterfront where we took the opportunity to take photos, talk about the challenge and exchange some gifts representing the architectural glory of Stockholm. This city was another that we vowed to visit for longer at a later date. 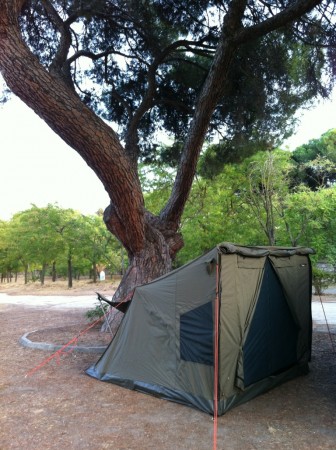 We had intended to go for something to eat together but, as parking in Stockholm is worse than in London, we ended up going directly to the campsite that Klas had arranged for us to stay at. It was a good campsite with shower blocks, toilets and shops. One of the donations for the trip was an OZ Tent, kindly given by Brendan of 4×4 Overlander. A remarkably useful piece of equipment: it can be put up by one person in less than a minute, although it weighs 20 kilos so requires a bit of muscle.

As I arranged our makeshift ‘home’ for the night, my partner went off to explore the site and facilities, but what happened next really came as a surprise and shock. I suddenly heard what I thought was a car backfiring, but when my partner returned she informed me that a shotgun had been fired. Apparently one of the local travellers at the site had a ‘falling out’ with another family member and had started firing his gun everywhere. I guess partially hearing it lead me to wrongly believe there was nothing wrong but my partner was shaken by the whole event.

Knowing that he had fled the site and assuming that the police would arrive soon to deal with any residual issues, we resolved to stay. As soon as I closed my eyes I was in a deep sleep.

Something we have noticed as we have travelled is that in every European capital so far there have been masses of police sitting waiting to respond to calls. In most areas there seems to be at least 10 to 20 mobile transit units full of officers waiting to pounce. I’m sure they are not our welcoming party but whenever we have spoken to them regarding parking they have come across as helpful and friendly.

The next morning we were up early and on to our next destination, Berlin. It was to be another long day driving, with 750 miles ahead, through Sweden, Denmark and back into northern Germany until finally reaching Berlin. Weather is the one thing you can never be sure will be kind to you, but luckily for us, although sometimes chilly, it was on the whole dry.

Once again we were back in northern Germany and heading towards the capital. After driving through some amazing countryside where there are fields upon fields of corn, we hit the outskirts of Berlin before finally arriving at the Berlin monument the Victory column.

Stopping to think about our journey so far, one thing that has struck me is the enlightened senses you gain from the fresh air and smells of all the different cities. It brings a different perspective to your travel and you begin to have a better understanding of life and, for me, to realise that many amputees will never have the opportunity or inclination to attempt what I have done. But this trip, I hope, will inspire and prove to others that it is possible.

Read about the next stage of Mark’s fantastic journey next week on Disability Horizons. If you missed it, take a look back at the preparations for this trip to discover how it was possible.

For more incredible travel stories visit our Travel section. If you have a story you’d like to share, get in touch by emailing us at editor@disabilityhorizons.com, tweeting us at @DHorizons or messaging us on Facebook.

The Disabled Looks Like Me Campaign.
https://disabilityhorizons.com/2020/03/leonard-cheshire-disabled-looks-like-me-campaign-raises-awareness-of-invisible-disabilities/
Do you wear any accessories that signal you have an invisible disability?

Andrew Lloyd Webber to stream his musicals online for free.
https://www.whatsonstage.com/london-theatre/news/andrew-lloyd-webber-stream-musicals-free-youtube_51313.html
Once life returns to normality, do you hope more companies and establishments will offer online tours and other events?