For years films and television programs have failed to represent people with disabilities. From blockbuster sci-fi films to hard-hitting dramas, disabled characters rarely get a look in. But what about animation films and characters for kids? Our writer Raya, a self-confessed animation film fan, wanted to find out.

My love for animated and cartoon films started in childhood and grew with me as I got older. Even now, in my adulthood, I get excited when a new animation is released. But, in all the years that I have been watching them, I struggle to recall many characters with visible disabilities.

This realisation made me angry, and forced me to question why? Why shouldn’t children be able to see disabilities and be encouraged to accept disabled people as they are? After all, how can we expect children to interact with disabled people if they are not taught from a very young age that being different does not make you an alien species?

So, to highlight where there is disability represented, I’ve compiled a list of ten animated and kid’s characters with a range of diverse disabilities. They’re all presented in different ways – some positively, and some not.

I don’t think I have ever met anyone who does not love the seven dwarves in Snow White. Many might not recognise them as disabled figures, partly because there is a lack of awareness of people with low stature. But also, when people are aware, there can be a stigma.

Unfortunately, the way in which the dwarves are portrayed is almost as if they are children. Snow White looks after them, puts them to bed and tells them off. I worry that this will lead its young audience to regard people with low stature as the same – children that need looking after.

Captain Hook, one of the main characters in Peter Pan, is a villain seeking revenge on Peter Pan for cutting off his left hand and feeding it to a crocodile. You could say it’s a positive that a disabled person is such a prominent character in a film.

But, for me, the problem with Hook being an amputee and a villain is that it suggests that disability makes a person evil. At least that is the image that will be engraved in the mind of children, who will grow up seeing disability or differences as a sign of distrust.

Quasimodo – The Hunchback of Notre Dame

In The Hunchback of Notre Dame, we see a disabled person as a lead character – a positive step. Quasimodo, who was born deformed and has a hunched back, believes his appearance is frightening to others.

As a child, the kind-hearted bell-ringer of Notre Dame was condemned to the cathedral’s highest tower by his cruel caretaker, Claude Frollo. Because of this, Quasimodo developed a yearning to experience the outside world and live a normal life amongst the people of Paris. 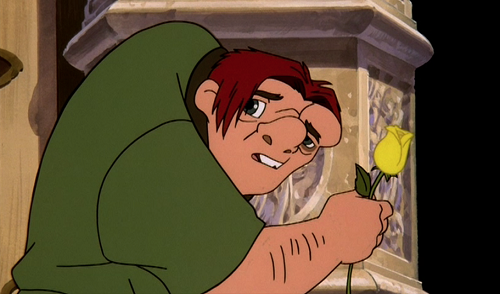 This is something that a lot of disabled people can relate to – wanting to be accepted and to simply live their lives.

Unlike Hook, Quasimodo is not evil. In fact, he is quite the opposite. However, there is still a potentially problematic representation of this disabled character.

I worry that his portrayal evokes pity and sympathy. Will children, therefore, regard disabled people as a group that needs pity? Or might it help to highlight the issue of prejudice and misunderstanding conditions?

Although not an animation character, I had to mention Sesame Street‘s new muppet Julia, who has autism. The goal of creating Julia was to portray what having autism is like. It proved difficult as autism is different for every person who has it.

But, it is an encouraging step that will make children or adults with autism feel less alone. I hope that it will also increase awareness of the condition, and hopefully change the attitude of those people who lack an understanding of autism and its characteristics.

Nemo is a young clownfish who lives with his father, Marlin. Before he hatched from his egg, Nemo’s mother, Coral, and the other eggs were killed in an attack by a barracuda.

Only Nemo’s egg survived, albeit slightly cracked. As a result of the egg damage, Nemo’s right fin is smaller than the left. Because of this, Marlin worries about him and is incredibly overprotective of his only son.

Although Nemo’s fin challenges his mobility, he wears it as a badge of honour, rather than looking at it as a setback.

Nemo is one of the best representations of a disabled character I have seen. He isn’t evil or super angelic, nor does he need pity or sympathy.

Making a second appearance, Finding Nemo has two disabled characters. Nemo and Marlin’s friend Dory has short-term memory loss. There are a number of conditions where memory loss is a part of or a by-product of a disability, such as dementia, depression, anxiety and autism, so it’s an all too familiar situation for many.

Her constant apologies for her forgetfulness, despite it not being her fault, makes Dory a character that many disabled people can identify with. Plus, although there might be occasional frustrations, Marlin and Nemo accept and love Dory just the way she is.

A Christmas Carol by Charles Dickens has been remade a number of times. It’s been a real-life film, an animation with Disney characters, and even a Muppet movie, where Tiny Tom was a frog.

Whatever form it takes, Tiny Tim is the youngest son of Bob Cratchit. Being mobility impaired, he uses a crutch to get around. His character is the main reason why Scrooge changes his ways as he witnesses Bob struggling to make Tiny Tim happy at Christmas.

Again, there is the element of pity being associated with this disabled character. However, Tiny Tim is also an incredibly positive and upbeat child, never dwelling on his problems and encouraging others to look at the positives.

Created by the Muffin Man, the Gingerbread Man, also known as “Gingy”, is one of Shrek‘s friends. He is first seen when Lord Farquaad has ordered his bodyguard to torture him, cutting off both of his legs and dunking him in a glass of milk. As a result, during the rest of the film, we see him using a crutch.

For me, Gingy is one of the more positive disabled characters I have seen. He is funny, lovable and strong-willed.

He is also very fast when running, despite using a crutch, showing that his disability does not hinder him or affect the way others perceive him.

Eeyore in the children’s classic Winne the Pooh has a very bleak outlook on life. It’s pretty obvious that he has some kind of mental illness, such as depressive disorder. What I think is great about his character, is that Eeyore is completely accepted by his group of friends. They don’t shun him and they don’t try to change him.

Although I can’t imagine children recognising Eeyore’s mental health condition as such, it does encourage them to accept others who might not be as happy or active as they are. It helps them learn to accept people for who they are, being supportive and not trying to change them.

Winnie the Pooh tackles and represents mental health in a second character. Piglet is constantly worried, more than the average worrier does. It’s clear that he has an anxiety disorder, low self-esteem and a stutter, possible as a result of his lack of confidence.

Again it is almost impossible for children to recognise his disabilities. But it does open up their understanding of the different characteristics of people and, more importantly, accepting them, just as Piglet’s friends do.

Ellen @ellenmfanning shares her story of how she was left deflated and alone when friends spoke to her about her Son.

Q. What challenges have you faced raising a disabled child?

Ellen shares her story of how she was left deflated and alone when friends spoke to her about her Son.www.theguardian.com/commentisfree/2022/jun/26/dont-worry-hell-be-right-why-do-we-say-all-the-wron...Q. What challenges have you faced raising a disabled child?#disability #Inclusion #raiseawareness ... See MoreSee Less

‘Don’t worry!' 'He’ll be right’: Why do we say all the wrong things to parents of children with a disability? | Ellen Fanning

The golden rule of supporting others is understand first, solve second – most of the time people are looking to feel heard rather than be fixed
View on Facebook
· Share