Michael Abbott recently won the  2012 On the Move photography competition for those aged over 18. Our roaming reporter, Zubee, spoke to him about his winning shot, ‘Gold Maybe Silver’, taken at the men’s Olympic C2 canoe slalom event, at the Lee Valley White Water Centre.

Please, can you tell DH readers a bit about yourself?

After 5 years of tests and visits to various hospitals, I was diagnosed with primary progressive MS in 1998. Fortunately, the progression has been quite slow and I am still able to lead a fairly full and active life, although this is determined by what my wheelchair is able to negotiate. I regularly attend the local MS therapy centre and find their support invaluable in maintaining a positive attitude towards my disability. I recently took early retirement after a career in the building industry. Our family has expanded with the arrival of twin grandsons, who keep my wife and I fairly busy on some weekends.

What inspired you to get into photography?

My interest in photography began when a Brownie Twin 20 camera turned up in a Christmas stocking when I was about 12. Understanding the technicalities of the camera, the photographic processes and composition, interaction with subjects and being out in the countryside or at a sporting venue were all tremendous stimuli. The final glory being the anticipation, excitement and satisfaction of seeing your moment in time recorded forever on a successful picture. It’s exactly the same 50 years on.

What do you think made you stand out from other disabled photographers in the competition?

I have no idea. I picked out 2 canoeing pictures and asked my mum which one she preferred. I said “this one,” and she replied, “no, this one is definitely the best. Mothers always know best.” And so it proved to be. Other than luck and the wonders of modern photographic technology, I still remain surprised to have won the competition amongst some extremely stunning submissions from my disabled photographic peers.

Anything that captures my interest. A camera can record your life, the people you love and care about, the beauty of the world we live in, the people and the animals we share it with, the places we visit, the force of nature and the joy of being alive.

If you were given half a day to teach other disabled people the basics of photography, what would you do?

I would tell them their lives have value and need to be recorded by a camera, on film or CD. Buy a camera, put it on auto and take a snap, print it and stick it in an album where others can assess the value, appreciate and benefit from it.

I would try to explain the simplicity of a camera and the influence of light to the relationship of aperture and speed. But most importantly, I’d say just enjoy using a camera.

If you had the opportunity to take a photograph of a famous person, who would you choose and why?

A difficult one. But, as 2012 was the Olympic year and I was able to visit the Olympic stadium on Super Saturday, it would have to be Jessica Ennis. When Jess crossed the line in her last event, the 800M, winning her gold medal, I, along with 80,000 other spectators, were screaming our ecstatic approval. It crowned an evening of athletic excellence which will live in my memory for ever. I have compiled my photo album of that fantastic night and any picture of Jess would complete my memories perfectly.

I read that you took your winning photograph at the Olympic C2 men’s canoe slalom event at the Lee Valley White Water Centre. What memories do you have of that day? 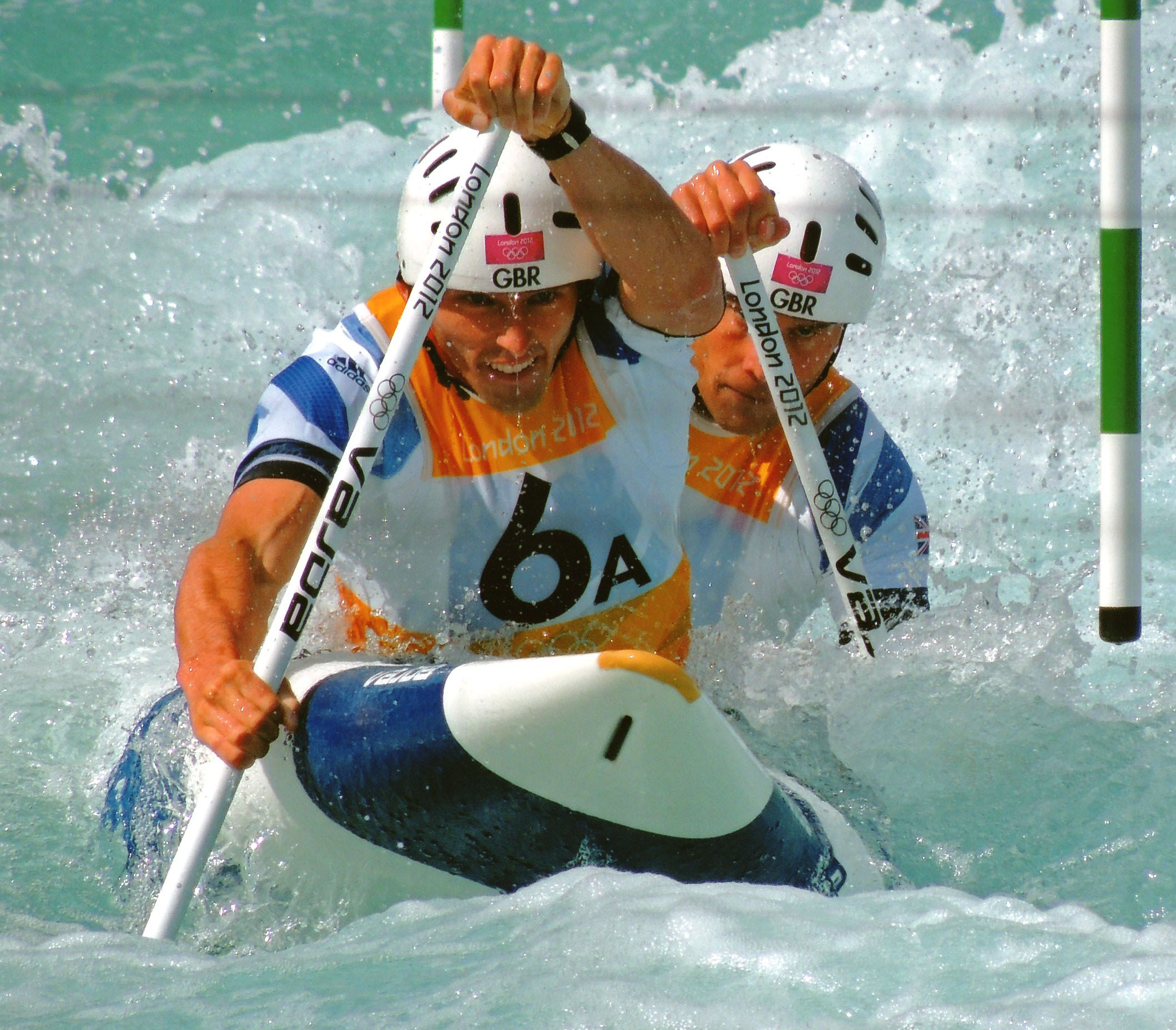 Lea Valley was the first of five days of Olympic euphoria. Days 2 and 3 were at the Olympic Park watching Jess, Mo Farah and Greg Rutherford, and then 2 more days at Weymouth seeing Ben Ainslie win gold together with Iain Percy, and Andrew Simpson win silver. More albums and more memories.

I had chosen the Men’s C2 Finals day as our local press in Bedford were shouting about the chances of local canoeist Etiene Stott in bringing home a medal. Where I sat was quite close to the slalom run and I thought I had a chance of taking a good shot. The Games Master showed us to our seats, adding that he thought we had the best seats in the house. He was right, we had nearly the whole winding falling slalom gates stretched out in front of us. It was great.

Both GB Teams of Stott/Bailie and Florence/Hounslow made the final six places. As I remember it, Florence/Hounslow had the better of the first run, which meant Stott/Bailie started first in the medal run. A wave of cheering pushed them down in a fast faultless effort, putting them first on time. It was up to the 5 other crews to beat them.

The excitement mounted as each crew, fanatically supported by their own countrymen, desperately tried but failed to beat the time. Leaving only Florence/Hounslow, Team GB were assured of gold. But could it be silver as well? And to which of the GB Teams would the final accolade go?

It was the final run after 5 days of canoe slalom competition. The expectation and excitement was palpable. For Florence and Hounslow, it was ‘gold, maybe silver’ time. Their run was greeted by a cacophony of cheering, and like a mexican wave, it rolled down the course in pace with the precision of their canoe handling delivering them at the winning line in super fast time.

There was a momentary hush as the whole stadium checked their time. Seconds later the stadium erupted again as they were confirmed silver medallists, a third of a second behind their team mates. It was a moment of pure sporting magic, which incredibly, was repeated 2 days later at the Athletics Stadium. I still find it hard to believe that I had been able to share these amazing experiences.

What do you like to do in your spare time?

Other than my photography, I have started a watercolour course, which is so very absorbing and relaxing. I also enjoy as many holidays as my physical and financial resources will allow, spending time with family and friends, visits to the local theatre and wasting too much time on my Play Station 3.

• Q&A with On the Move photography competition winner.
• Viewing disability and difference through the eye of a lens.
• Changing the world one photograph at a time.

Are you a budding photographer? Why not show us your photographs by posting them on our Facebook wall, or tweeting us @DHorizons?

7 accessible activities to enjoy this Halloween

Breaking down taboos around disability and periods

7 accessible activities to enjoy this Halloween

Breaking down taboos around disability and periods

Stay warm this winter with our new range of premium quality hoddies available to buy on our shop @ShopDHorizons.

Here, we share 7 fun, original and imaginative accessible Christmas gifts for disabled children, all of which can be bought on the Disability Horizons Shop.
View on Facebook
· Share

This creative, quirky and stylish hoodie – designed by the Disability Horizons team – is great for people who want to fight for and celebrate disability equality and inclusion, or simply raise a w...
View on Facebook
· Share

Our writer, Raya got the opportunity to have a fir

⭐LAST CHANCE⭐ to enjoy 10% off everything in o

LAST CHANCE to apply for @britishbakeoff 2023 –