From the weird to the wonderful, we’ve been looking for the latest, coolest, most innovative and quirkiest prosthetic limbs. Who said disability can’t be beautiful? Prepare to be amazed, shocked,  or awestruck…

Prosthetic limbs have come a long way since the 16th century, when ‘the father of prosthetics’ Ambroise Pare started practicing in France. From running blades to 3D printed limbs, it’s now possible to pimp up your prosthetics as much as your car or wheelchair.

With artists and industrial designers getting in on the act and creating one-of-a-kind pieces, bespoke prosthetics are fast becoming popular, while 3D printing is also making prosthesis cheaper for those who don’t have thousands to spare.

So if you want to upgrade your look, or start taking part in a new sport, here’s a list of our favourite prosthetics companies, artists and pioneering designers.

Remember that glittering, Swarovski encrusted leg that Viktoria Modesta wore to the closing ceremony of the Paralympic games? That was designed by Sophie de Oliveira Barata, founder of the Alternative Limb Project. Oliveira Barata brings her artistic background (she originally trained as a film and TV prosthetics designer) to every bespoke limb she creates, aiming to show the wearer’s personality and individuality in each piece.

With designs featuring snakes, henna tattoos and stereo speakers, her bespoke limbs are guaranteed to make you stand out from the crowd. The Alternative Limb Project is currently looking for amputees to star in their new documentary, for which you’ll get a free, bespoke prosthetic limb.

Coming from an industrial design background, and with previous clients including Apple and Nike, Scott Summit had years of experience behind him before he entered the prosthetics industry. Using 3D scanning techniques, Bespoke Innovations mirror the bodies natural contours and fit around an existing prosthetic leg. With the option to design your own limb, you can add shiny metal, leather and even tattoos into the mix. Summit also gave a TED talk in 2011 about the beauty of prosthetic limbs, take a look at what he had to say on the TED website. 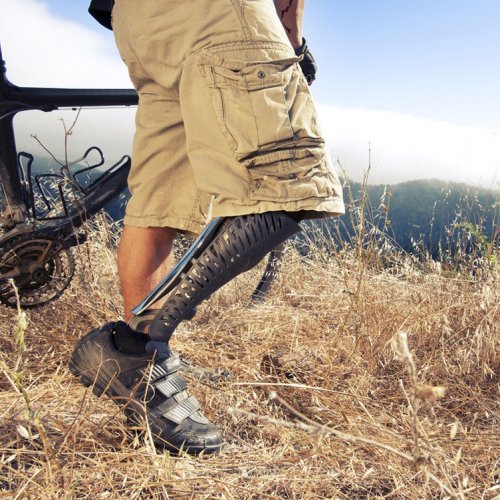 3.  A Step Ahead Prosthetics

Based in New York, Boston and Israel, this innovative company supports over 75 athletes who require prosthetics throughout their athletic careers. Combining top-of-the-range technology with artistic design, A Step Ahead has previously designed limbs featuring Spideman, soccer team logos and ones that match your natural skin tone.

Made famous by the now highly controversial Oscar Pistorius, running blades allowed Pistorius to be considered an ‘able-bodied’ athlete and run in the Olympics instead of the Paralympics. Designed specifically for athletics, blades give amputees the chance to participate in high-end sports.

Amputee Blade Runners are an American not-for-profit organisation that aims to put athletes in touch with funding so they can receive their own blades.

For those without thousands of pounds to chuck around (that’ll be most of us then), Robohand, a new American startup company, are here to help. After cutting off the fingers of his right hand in an accident, founder Richard Van As set out to do something about it.

Teaming up with designer Ivan Owen, the pair made a Robofinger, a Robohand and eventually a Roboarm. This month they’ve also introduced the RoboLeg, their first lower body design. As all of their prosthetics are 3D printed, they are able to operate at a much lower cost, with limbs going for as little as $500, which is about £300. Kindly, they’ve also made their designs opensource, meaning that they’re available for free on the internet, so technically anyone with a 3D printer and the right materials can make them. Now that’s what I call revolutionary, could this be the future of prosthesis?

• Sex tips from a sexy ‘crip’
• Challenging impaired perceptions of disability
• Accessibility in Tokyo: the good, the bad and the annoying

Tell us what you think of these limbs, or if you’ve seen any as impressive? Get in touch by leaving a comment below, messaging us on Facebook, tweeting us @DHorizons or emailing us at editor@disabilityhorizons.com.

Stairlift costs: how to make buying one more affordable

Stairlift costs: how to make buying one more affordable