Blaine Harrison, who has spina bifida, is probably one of the most recognised disabled musicians and songwriters, best known for being the lead vocalist of the indie rock band Mystery Jets. We talk to Blaine about how he got into music and how we can all make music more accessible for everyone.

The first memory Blaine has of music actually impacting his life was as a child. “I remember hiding behind the sofa while my parents watched Alan Parker’s The Wall” he said. Catching glimpses of it through his fingers of children being fed into sausage machines to the sounds of late 70’s Pink Floyd was “quite terrifying,” and gave him his first taste of how music can fire up or elicit emotions.

From quite a young age Blaine realised that he “probably wasn’t cut out to be an athlete.” “At school I was always being persuaded to try taking part in this or that. But eventually the teachers must have decided to take my name off the register because I was allowed to disappear down to the music school all afternoon.”

Although at that stage Blaine was not able to make sense of music notation, he still found himself disappearing into his “imagination in front of the piano.” He describes that feeling as the same as when he used to play out “gruesome battlefield scenes on my mother’s vegetable patch.” It was a world that he found he could completely lose himself in. “It didn’t really even strike me that it was a world I could share with anyone else until later on.”

Blaine, who uses crutches to get around, jokingly explains that he made music because girls at his school only fancied the 6 foot rugby meat-heads, but knew one day all this would change. To him, disability only really exists in other people’s eyes: “You don’t miss something when you’ve never experienced it.”

When Blaine finished high school he, along with his friends, self-booked their first tour in the summer where they played up and down the country. Blaine describes: “There were a lot of empty rooms, but we were so enthralled at our liberation from the education system that we couldn’t have cared less.” They slept on floors and in fields, eating their lunch from out of supermarket trolleys in parking lots, all of which Harrison Blaine recalls as being “glorious.” He adds: “We signed our first contract with Transgressive records the following year and released our debut Zootime/Lizzy’s Lion in February 2005.” 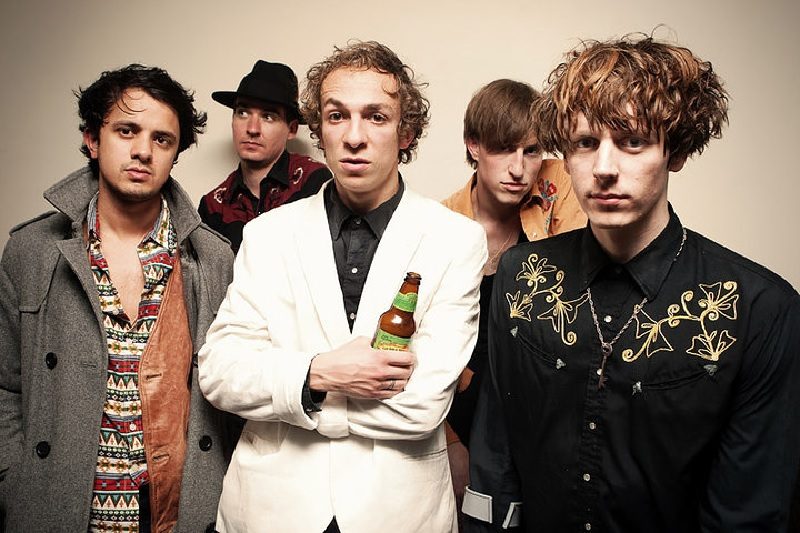 When asked if the image and attitude society has towards people living with disability makes it harder to progress and succeed in the music industry, Blaine replied: “Government cuts aside, I feel like disabled British citizens are actually better supported than ever in this society. People’s attitudes have shifted tremendously over the last twenty years and there are fantastic opportunities out there. This is becoming more and more visible in the music industry as the ‘access’ movement gathers momentum.”

He does acknowledge though that the real problem exist in the fact that there still aren’t that many role models out here for young people starting out. “It is time for the Paralympians of the creative world to come forth and inspire us all.”

This led to the subject of how accessible music is for people with disability; to study, perform or even as a spectator. Blaine works with a charity Attitude is Everything (AIE), which has spent the past twelve years improving access to live music for disabled audiences. “Its work is picking up incredible momentum and Suzanne Bull (the charity’s founder) picked up an MBE last year for her services in the industry. We work together to create exiting, accessible shows and it really feels like the world is starting to get on board.”

He goes on to add that; “Suzanne has an incredible attitude and I love working with her. I am fortunate in that I get to see both sides of the curtain and this gives me an opportunity to help.”

Change begins at home, believes Blaine, and that is why he wants to see more independent venues in the UK taking an interest in improving their facilities to accommodate a more diverse audience. “AIE had it’s 200th venue sign up this year – let’s get it up to 300 in the next two years. Outdoor events are a big part of this too. We have one of the most vibrant festival scenes in the world, so why don’t we use this platform to celebrate those on the fringes?”

He urges those with influence to; “not tuck the people with the blue badges away in a nice quiet campsite away from the action,but let’s make the action more accessible. Social media has made it easier than ever to make your voice heard, so if you share this sentiment, come and join us down the front.”

There are many disabled people who have a passion for music, but don’t have the support to pursue this passion. A good way to start, according to Blaine, is by getting involved in your local scene. “If you’re a musician, book a show at a venue you like or, if you’re more interested in working behind the scenes, why not book a friend’s band. Speak to the manager about what facilities they have. Is the entrance step free? Can someone in a wheelchair access the bar? Is the stage more visible from a certain part off the room? If they’re not brushed up on disabled access get in touch with Attitude is Everything’ and ask them directly about how to get the venue signed up the charter.”

Even if you don’t want to work in the music business but are a music fan, Blaine advises people to become a mystery shopper. “AIE is always happy to provide tickets to gigs in exchange for a report back on how the venues measure up.”

On the theme of venues, we wanted to know what the weirdest or wildest gig Blaine has done. He fondly recalls: “We played in woodlands at TX on tour in the states a couple of years ago and the show was picketed by the Westbro Baptist Church (if you’re a Louis Theroux fan you will know who I’m talking about). Half way through our set I asked the entire audience to join me in shouting a massive ‘**** off’, which I’m guessing they heard as they had vacated the parking lot when we came out.”

Mystery Jets has built a studio in London to make music freely, as they want to use the space to; “produce other artists we believe in whenever we have windows of time between touring. To me it all feeds into itself and I feel more creative than ever right now.” Music has shown Blaine the world as he sees in, and for that he will “forever be grateful for that.”

⭐NEW ARTICLE⭐ Brand new series hosted by Alastair @campbellclaret on @Channel4 is set to lift the lid on what it's like to be Prime Minister.

Starts tonight at 9pm on Channel 4.

These easy slip-on women's trainers are lightweight and have a cushioned insole to make walking easier and more comfortable @ShopDHorizons.

⭐NEW ARTICLE⭐ Brand new series on Channel 4 is set to lift the lid on what it's like to be Prime Minister.disabilityhorizons.com/2022/09/meet-the-candidates-representing-disability-in-new-show-make-me-pr...Starts tonight at 9pm on Channel 4.#channel4 #tvshow #disability #inclusion #politics #raiseawareness ... See MoreSee Less

Make Me Prime Minister is a brand new Channel 4 series that is set to lift the lid on what it really takes to be Prime Minister. The alternative political show includes three candidates with a disabil...
View on Facebook
· Share

These easy slip on women's trainers are lightweight and have a cushioned insole to make walking easier and comfortable.shop.disabilityhorizons.com/products/excursion-low-top-womens-navy-pink-disability-footwear-frien...#disability #adapativefootwear #onlineshopping ... See MoreSee Less