Sannah Hussain isn’t your ‘typical’ boxer. She’s female, Muslim, visually impaired and has muscle weakness. But that’s exactly why she’s passionate about making the sport more accessible. Writer Raya AlJadir spoke to her to find out how she got into boxing, the challenges she’s faced and how she hopes to change the face of boxing. 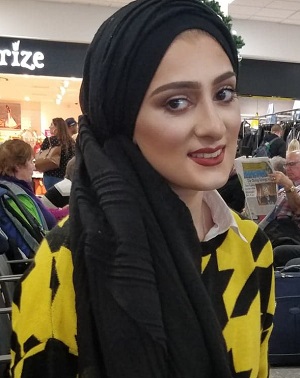 Sannah Hussain is a 25-years-old Pakistani Muslim born and raised in Glasgow. She has Myasthenia Gravis, a chronic autoimmune neuromuscular disease that causes muscle weakness. She also has Albinism, which causes skin whitening and problems with eyesight.

Her story highlights just how much people with a range of disabilities are capable of, and why sport needs to be more accessible, and less discriminatory, for everyone.

What inspired you to get into boxing, an essentially male-dominated sport?

I never thought I would enjoy boxing as much as I do. I came across it when the charity I worked for began running a ladies-only boxing class. It wanted to promote female empowerment, as well as positive health and wellbeing within the Glasgow’s Asian and Muslim community.

I have also always been an active and sporty person, regardless of my health and its limits. I was never good at team sports as I couldn’t keep up with others or, in many cases, see well enough to take part. But boxing is a lonely sport, where you only have to rely on yourself.

This made it easy for me to enjoy over other sports, It meant I didn’t have to feel guilty about letting other people down, or sad that I wasn’t progressing as fast as my teammates. I was getting out exactly what I put in. This motivated to keep working out and attending classes.

How often do you train and are there elements of boxing that you have to do differently because of your disability?

As well as the weekly ladies class, I also attended other classes throughout the week. It intensified in the run-up to a fight. For those, I have six weeks of training, covering everything including boxing technique, stamina, muscle strengthening and general fitness.

When I started, my trainer knew that I was visually impaired and had a muscle weakening disease. He initially didn’t think that I would not be able to fight at all. But I convinced him that I was motivated enough to do it. So, we came to an agreement that I could take part in the training but, if at any point he thought I wasn’t ready, I would have to accept his decision and not fight.

Luckily this never happened. Although I sometimes struggled to keep up with the other fighters. I’ve also had my fair share of knocks and falls. But I always get back up and reminded myself that I can carry on.

It’s really encouraging that a lot of members and fighters at the gym didn’t, and still don’t, know about my disability. I am always really happy to hear experienced fighters say I am doing well. Many have been very shocked and inspired that I can’t see very well and have an illness that makes me weak and tired.

What was your first fight like and did anything have to be put into place?

For my safety, I had to have a medical examination beforehand. I thankfully passed it, but was told that I needed to listen to my body and stop if I needed to. This still applies today.

The first fight didn’t include head shots, where your opponent goes for your head. The rounds were also shortened as it was an exhibition fight to introduce me to the boxing ring. My coaches didn’t want my first experience to be a bad one.

However, it was very real and very hard. My opponent did not take it easy on me!

What has been the hardest part of living with a disability?

For me, I struggle to decide how much emphasis I should place on my disability. Whether someone’s disability directly impacts their mental health or not, living with an illness requires psychological strength. While a lot of people can be very supportive, it is just as easy to find unsupportive people, too. Their negative comments can be hard to ignore.

Living with ‘invisible illnesses’ is particularly difficult. I often feel people’s judgment when I’m asking for support. For example, in many supermarkets, there are tills that enable disabled people to jump the queue. But, regardless of how tired I am, I won’t use them because I have experienced people looking at me trying to figure out what was ‘wrong’ with me.

When I was younger, being a Muslim girl and white because of my condition, also meant I faced a lot of prejudice. It made me stop and think how prejudicial the world can sometimes be, especially when it seems to come from what I would class as my own community.

How accessible is the world of boxing for people with disability?

It really depends on the individual’s ability. Boxing requires you to be very mobile and have fast reflexes. Also, as most fighters are equally matched, for boxers that have an illness or disability, it is very hard to find an opponent.  It is impossible to predict if a match is a fair fight or not.

Do you think the image and attitude society has of people living with a disability makes it harder to progress and succeed in sport, and especially boxing?

Yes, I believe it does. Unfortunately, the general attitude toward people with disabilities, especially physical ones, is that you can’t possibly be physically active at all. The world is extremely uneducated about disabilities.

It’s true, disability can be unpredictable – you never know what may happen tomorrow and how your life may change. We don’t all fit easily into understandable boxes.

Like many other sports, boxing is not a Paralympic sport, which to me is shocking. I have fought against an able-bodied fighter and lived to tell the tale. I would love to see boxing in the Paralympics one day. I know there are people that would be able to relate to those athletes and inspire them.

In your opinion, what are the main challenges that female disabled face, especially Muslim women?

Everyone’s disability and life is different. But for me, as a disabled Muslim woman, my main struggle is simply finding others like me. It want to be able to share my experiences and better understand my own short-comings.

I have come across many women with disabilities. But people forget that our culture has a big part to play in the challenges we face. The attitude towards disability in the Muslim community – or at least the community I grew up in – is very different to those that a non-Muslim.

What is next on your plans both professionally and personally?

Professionally, I have started a new fundraising job, so my focus is on getting disabled people more involved in charity work. I have found it has helped me gain more confidence, regardless of my health.

I have also been approached by a number of organisations about sharing my experiences of having a disability and being a Muslim woman. It’ll be a great opportunity to encourage others to be braver and to do things they have given up on.

Personally, I am still trying to understand my own illnesses and accept how they will impact my future. I’m always trying to develop myself and grow so that if my illness does reach a point where I am unable to do various physical things, I still have other opportunities I can fall back.

Ultimately, I want to keep reaching more people with similar illnesses to let them know they aren’t alone with what they are going whether that be now or in the future.

What would you say to other disabled people wanting to take part in sport or achieve their dreams?

In today’s society, we compare ourselves to everyone. But progression and success shouldn’t be based or measured on other people. What we forget is that what may not be a win to someone else, could be a big win for you.

I truly believe that only you should be the one to determine what success looks like for you. So take time to learn to appreciate those wins as and when they happen. The more we all think in that way, the happier we will be every single day.

I am always happy to be contacted by anyone seeking advice or support, whether it is because of the challenges they face due to their gender, religious, disability or even the colour of their skin.

Shielding stories: the forgotten isolated who have been in ‘lockdown’ since March

Shielding stories: the forgotten isolated who have been in ‘lockdown’ since March

How AccessAble's website and app can make your life easier

3 top-rated products for disabled people on Rate it!

'We encourage those with disabilities to play alongside their non-disabled peers.'

#ICYMI read all about how #boccia has changed @gemoore83's life, including how it inspired her to form @gembocciaclub to help others here: #sport #Disability

To celebrate International day of deaf and disabled people on 3rd December, Disability Horizons want's disabled people in the spotlight, please check out our Facebook post on how you can get involved.😀https://facebook.com/groups/DHorizonsTribe

Let's get creative and have some fun!😎

'We encourage those with disabilities to play alongside their non-disabled peers.'

#ICYMI read all about how #boccia has changed Georgina Moore's life, including how it inspired her to form her own club to help others here: #sport #disability

How Boccia Can The Life Of Many Disabled People

Finding Boccia has given wheelchair user Georgina Moore so many positive experiences. She hopes to use it to change the lives of other disabled people.
View on Facebook
·Share

Share on FacebookShare on TwitterShare on Linked InShare by Email