Glow Up is a make-up competition broadcast on BBC Three, in which 10 aspiring make-up artists compete to win a contract to become a professional make-up artist assisting big names in the industry.

Series three is celebrating disability and diversity with two autistic contestants and an influencer with a visible birthmark, as well as a mixture of genders, races, religions and sexual orientations.

UPDATE: On 8th June 2021, Sophie Baverstock – who is autistic – was crowned the winner of Glow Up: Britain’s Next Make-Up Star. Read on to find out more about her and the other contestants in the show.

Presented by Maya Jama, in each episode the make-up artists (MUAs) work on different professional assignments and demonstrating their talents in the creative briefs.

The MUAs are critiqued by resident judges Val Garland and Dominic Skinner with a glittering array of guest judges and experts.

The MUAs will work on everything from studio shoots and campaigns with Superdrug and Asos, through to period make-up and prosthetics on set with Pose, The Crown and Peaky Blinders.

Each week, two MUAs who fail to deliver will go head-to-head in a face-off, in which one of them will be eliminated from the competition.

Four episodes have already been streamed on BBC Three, which is exclusively available on BBC iPlayer, with four more weeks left until one make-up artist is crowned ‘Britain’s Next Make-Up Star’.

Glow Up celebrates disability and diversity

For this year’s series of Glow Up, the show has welcomed three contestants with a neurological disability and visible difference. Two of the contestants – Sophie and Xavi – are on the autistic spectrum and Ryley was born with a birthmark on the right side of her face.

Read on to find out more about these extraordinary and talented make-up artists. 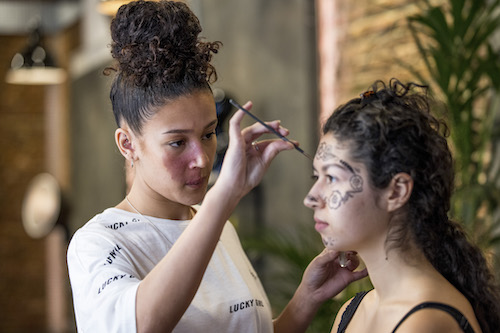 Ryley Isaac is a 19-year-old social media influencer and aspiring make-up artist. She posts regular make-up and beauty tutorials on her Instagram and TikTok accounts and has more than 700,000 followers on each platform.

She was born with a port wine stain birthmark across the right side of her face. At school, she felt incredibly insecure about it, so used makeup to cover it up.

Speaking to BBC Three, she said: “At secondary school it was all about being popular, being beautiful, having everyone like you, and I felt like I didn’t quite fit in.”

Using makeup to cover her birthmark meant Ryley had to get up really early, which was becoming exhausting.

A couple of years later, a friend encouraged Ryley to post a picture on Instagram of her natural face. Eventually, she decided to upload a photo and the positive comments flooded in.

“That was the transition then, where I started using make-up to make me feel good instead of hiding who I am.”

“Now I use make-up as a form of celebration of my difference and I do make-up for me – which I feel like everyone should do, you should never try and change yourself or your appearance for anyone else – that’s a massive no.”

Sophie Baverstock is a 21-year-old make-up student who is studying BA (Hons) Make-up For Media And Performance at The Arts University Bournemouth.

She was diagnosed with autism at the age of 17 and admits she “always felt a bit odd”.

Speaking on Glow Up, Sophie said: “On a bad day, giving someone eye contact is physically painful. But my autism affects my makeup in a positive way. I see makeup as like a process and I visualise it in my head.”

She added: “I entered this competition because I’ve just been told I can’t do stuff for so long, but I don’t think that makeup not being in my life is an option.”

Sophie describes her make-up style as, “Very detailed and symmetrical a lot of the time. I’m definitely a perfectionist like to the point where it’s like a problem.”

Aged 23, Xavi Guillaume is a freelance journalist and make-up enthusiast. He has Asperger’s Syndrome and uses make-up to illustrate what it’s like to live with it.

At school, Xavi started experimenting with make-up in secret. At age 16, his friends would order the products for him and have them delivered to their houses, “I’d do looks in the middle of the night, take pictures and put it on Instagram.”

Asperger’s is a condition on the autistic spectrum that affects how someone sees, hears and interacts with the world around them.

Make-up became a way for Xavi to express himself and a medium of relaxation, things he had always struggled with as a result of his Asperger’s.

He told BBC Three: “With Asperger’s Syndrome and autism you can have triggers, you can have episodes, some days are really good and some days can be really bad – growing up I was really embarrassed by that and I wouldn’t want to talk about it.

Xavi added: “Make-up and my Asperger’s has definitely gone hand in hand.”

“It was extremely liberating to be able to put how I feel in my head onto my face, my canvas, because using make-up is one of the first times that I’ve been able to illustrate how my brain works.”

Sadly, Xavi was eliminated from the show in episode three.

Glow Up: Britain’s Next Make-Up Star is available to watch on BBC iPlayer, with new episodes streamed from Tuesday nights at 7pm.