Philip Hoare, an avid gamer who has Spinal Muscular Atrophy (SMA), runs through the best accessibility features on a whole host of consoles and games, so you too can enjoy the world of gaming.

Before I start talking about the accessibility options available to disabled gamers, I’d like to tell you a bit about myself. I am a 17-year-old teenager who, yes, plays a lot of video games. I have a disability, SMA Type 1-2, which renders me unable to move my legs or arms very far. This means I reliant on a wheelchair and my reach is limited. But none of this gets in the way of my favourite hobby, video game playing.

Consoles that great if you’re disabled

There are a lot of things in our world that are inaccessible – from a step into a restaurant to toilets that aren’t adapted. Disabled people sometimes get left on the sidelines, unable to participate. Thankfully, that isn’t the case for a lot of gaming consoles.

Let’s face it, companies want you to buy its games. We, as a community, are a target market that is worth selling to. So developers will try to help disabled people out, even if it takes time. So, without further ado, here are just some of the great examples to get you started.

PlayStation 4 and Xbox One’s accessibility features allow you to completely redesign the layout of the controller to suit your needs. This is great if, for example, you can’t reach a particular button that you would use a lot for a specific game and so need to swap it for another. There’s only one problem here – it doesn’t save the layout. My workaround is that I have a notepad with controller configurations written down for each game I play a certain game. 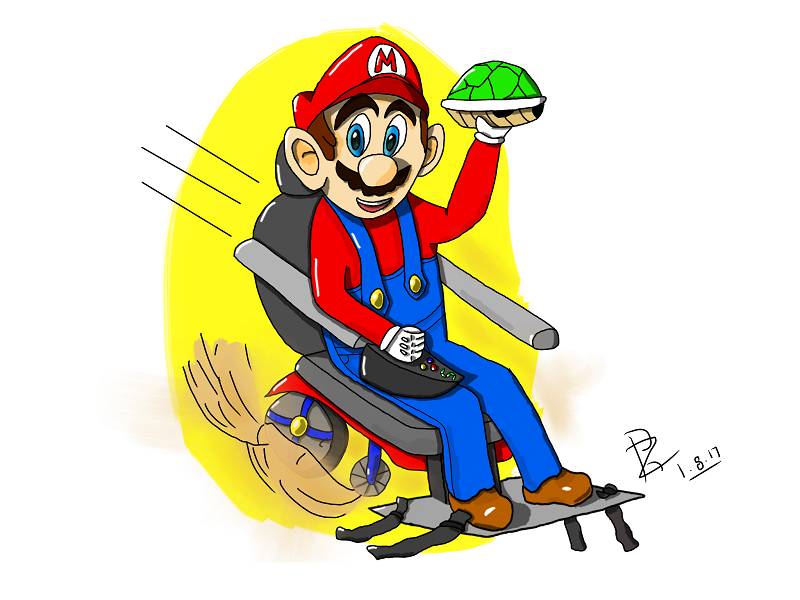 I’ve also seen that Xbox One allows players to pair a second handset with the first one, allowing it to actually have some control over certain areas. This could be a great help if you need a carer to assist with some buttons or multitasking, but you don’t want them using the same remote and getting in the way. The feature is called Co-Pilot and can be found alongside other accessibility options. I, however, have yet to try it out myself.

The Elite controller will set you back at least £100. But the controller has a great set of features that others don’t. For example, it contains flippers that can be attached to the bottom of the controller, which can be assigned to any buttons you like, making the ones you need more easily accessible.

The Elite controller is a great achievement in customisation. However, I personally find the paddles difficult to reach and the controller too big for my hands. This applies to all Xbox controllers, and is a personal preference – you might find it perfect for you. Because of the price, I would recommend reading reviews and going to try it out in game shops before buying one, to really get an idea of how they are to use.

Unfortunately, not all gaming companies are as good with accessibility, Nintendo being a prime example. Nintendo thrives on its ability to be innovative. Just take a look at the Wii and how original that was at the time. But the only problem with these new designs is that they often involve a lot of hard-to-use functions for a disabled gamer. For example, I cannot use the Wii because it relies a lot on motion control, where you need to use hand gestures or movement to control the game, which I’m not good at.

However, all hope is not lost with Nintendo, all you Zelda and Mario fans, like myself, out there! It does have a console called The Switch, which I find is a very easy to use. It is essentially a controller that is made up of two handsets, which can be used joined together as one, or separately.

Despite this, I’ve found that the only buttons I am unable to use are when clicking in the joysticks, but this is a problem across all consoles for me. Leaning the controller on a cushion (which I advise for anyone unable to find a comfortable gaming position) allows me to stand it up and push the back buttons with ease.

Accessible gaming on the computer

But not everyone has a console, so let’s look at accessible gaming options on PCs. Customising the controls here are usually easy as most games allow key binding options. This is where a key you choose actually performs another function so that you can play with different keys.

Generally, computer mice you would use for gaming can have five or more buttons, which can make them tricky to use if you have muscle weakness or dexterity issues. But there are mice available that allow you to remap buttons, like you can with some of the controllers I have mentioned above.

I have also found that heavy mice are difficult to use, so I keep to using a small one, the Logitech M185.

If you’re visually impaired, there are options to have narrations on games, and the ability to use a magnifier. If you have a hearing impairment, subtitles are always available, too.

Now the big challenge is virtual reality (VR) gaming. VR is becoming massive on the gaming scene right now, with PlayStation VR doing well and company Oculus still making good progress as the forerunner. You can even get cases to put your phone in and play the 360-degree videos, which I recommend for the fun of it.

However, there are some worrying problems here when it comes to accessibility. But these can be solved with a little bit of time and effort.

The first issues it the weight of the headsets you have to wear to play VR games. When I tried out the PlayStation VR, I found that after 30 minutes of playing, my neck started to ache. So if you have difficulty holding your head up, I’d recommend waiting for the technology to evolve before going head-first into this. I’m sure that soon companies will be able to design slimmer versions that weigh less for longer play.

The next problem is motion control, like what you have to use with the Wii. As VR develops further, so too will motion control as people want to feel like they’re involved in it and actually there. This causes a problem for disabled people because we either find it impossible to do motion control or, after a while, feel fatigued from it. I certainly experienced this with some of the PlayStation VR games I played. Again this would be an easy fix, if there was an option to turn motion controls off, which I am sure will be implemented in the future.

Finally, there is always help out there. Some companies, such as Special Effect, are striving to create disability-friendly gaming and are developing all new ways for people to play. These are crafted on a case-by-case basis to fit that specific person’s needs. I have a customised controller that I can use myself, which works perfectly.

So there you have it, my crash course manual to being a disabled gamer. There are solutions out there, it’s just a case of finding the right ones for you. Now would you kindly get travelling, slaying, hunting, racing and saving the damn world!

Throwback - We round up 5 accessible fitness aids to help you keep active if you have a disability available to purchase on our shop @ShopDHorizons.

Q. What is your favourite piece of equipment that you like to use?

Wheelchair access at the Commonwealth Games prevented a boy from being able to see a basketball match due to high railings.

Q. For those who went to watch the games, what did you think of the disabled access?

Throwback - We round up 5 accessible fitness aids to help you keep active if you have a disability available to purchase on our shop.disabilityhorizons.com/2021/07/exercise-equipment-for-disabled-people-to-help-you-stay-active/Q. What is your favourite piece of equipment that you like to use?#disability #healthandfitness #access ... See MoreSee Less

Check out these 6 pieces of exercise equipment for disabled people, from gripping aids to pedal and hand exercisers, available on the Disability Horizons Shop.
View on Facebook
· Share

Wheelchair access at the Commonwealth Games prevented a boy from being able to see a basketball match due to high railings.www.bbc.co.uk/news/uk-england-birmingham-62423223Q. For those who went to watch the games, what did you think of the disabled access?#disability #accessibility #inclusion #wheelchairuser ... See MoreSee Less

Amy Ryan says her son could not see a basketball event from his wheelchair due to high railings.
View on Facebook
· Share

Throwback - If you are looking for somewhere to ge

With the start of the European Athletics champions

⭐EXCITING OPPORTUNITY! ⭐ We're looking for a

Working with @starlingbank on a series of travel a

The new series of Celebrity Masterchef is due to s