Wheelchair user and festival goer Alex Squire recently told us about the accessibility at the British Summer Time festival in Hyde Park and Bluedot festival in Cheshire. This week, he’s back to tell us about his recent visit to Lost Villiage festival.

Lost Village was a three-day festival that took place in the picturesque countryside of rural Lincolnshire. It spanned both grassy fields and woods, and included a lake. It was a very beautiful setting for a festival.

However, as you can imagine, woodlands present a number of accessibility challenges – mud, uneven ground and fallen sticks. All of these proved to be problematic for me at Lost Village.

There was no accessible viewing platform at the main stage, which would have been useful. When bands were playing it got very crowded, so I usually couldn’t see the stage over the back of people’s heads. But, on the flipside, being in amongst the crowd meant I could interact with a lot of great people and really soak up the atmosphere.

The main stage was on open grassland, with lots of food outlets and bars nearby. DJs were also playing electronic dance music in a number of woodland clearings, which were connected together by dirt paths.

The clearings themselves were mostly on level ground, as were the paths, but there was a certain amount of mud. The grassy area around the main stage was fairly easy for me to drive my power wheelchair over, but it was a little bumpy.

However, not all of the stages were on the flat – many sat in areas with very uneven ground and lots of woodland debris, such as hidden dips, twigs, tree stumps, and roots everywhere. All of these made it tricky to drive my power wheelchair. I had to constantly keep an eye out for hazards in my path.

It was the same for the dirt paths, which made for a bumpy ride. They also became muddier after it rained, but they weren’t as bad as I was expecting. Some wood chippings were added to the muddiest areas, which I think helped to a certain extent.

It also rained heavily on a couple of the days, so it became progressively muddier towards the end of the festival. I had to be careful to avoid the muddiest patches as I didn’t want to get stuck.

Temporary pathways would have been better though to provide a smoother ride and help mitigate the threat of mud.

Other areas at the Lost Village festival

By the lake, named the Lake of Tranquillity, there was a wellness area where you could have a massage or use one of the hot tubs. Unfortunately, the hot tubs were off-limits to me because there was no hoist. I also wouldn’t have been able to stay upright without some sort of seat.

I did have a head massage there last year, which was quite nice. What I really wanted was a full back massage though. But I couldn’t have had one as I needed to get onto a bed for that and, again, there was no hoist.

The gravel/mud/grass road that ran around the edge of the lake was relatively easy to drive along. I think it would probably have been more difficult for a manual chair to travel over as the road was quite uneven.

Besides the music, there was also stand-up comedy and talks on a number of interesting subjects. However, I wasn’t able to go to any of them because of my hearing loss – I wouldn’t have been able to hear what they were saying over the relentless boom boom boom of the music in the background.

I did go to a couple of ‘Tribal Banquets’, which were essentially sit down meals cooked by Michelin starred chefs. The banquets took place in a marquee next to the lake. The food at both of them was excellent, despite being a little odd at times!

The wooden floor of the marquee was a few inches higher than the ground beneath it, so it was difficult for me to get into the tent. To get up the step I needed help from a couple of guys lifting the front of my chair. It wasn’t easy, especially in the pouring rain. I really needed a ramp.

There were some accessible portaloos around the main stage, but not many. They were hidden behind the rows of normal portaloos, so I initially didn’t think there were any as I couldn’t see them. Also, there wasn’t a wheelchair sign on them to make it clear that they were disabled toilets. Some were also in an extremely awkward position that made it difficult to get into them. 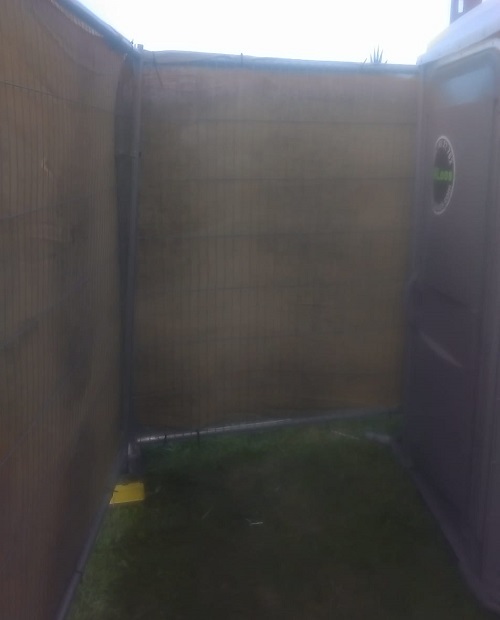 There also weren’t any accessible portaloos near to the marquee where the banquets were held, or in the woods. So, if I needed the toilet, I had to go round the corner of the tent or in some bushes and hope that no one was looking. Far from ideal, but at least a lot of other people were doing it!

Overall, Lost Village needs to make a lot of improvements to make it accessible to disabled people. Temporary pathways and accessible viewing platforms are a must. It would also be nice if hoists were available by the hot tubs and in the massage tents so that wheelchair users can enjoy them too.

The organisers of Lost Village could learn a lot from the Blue Dot and British Summer Time festivals, both of which had excellent accessibility. I think it says a lot that I didn’t see any other wheelchair users there, this year or last. Will I go back next year? Probably not.

Did you visit any festivals or concerts this year? Get in touch by emailing editor@disabilityhorizons.com, leaving your comments below, messaging us on Facebook or tweeting us @DHorizons.