Artist Chris Tally Evans talks to Disability Horizons about how he became a ‘story teller’ and how his recent work, Turning Points, was recently featured as part of the London 2012 Festival.

People often ask me; “so what is it exactly that you do?” It’s a reasonable enough question, a simple one, one that deserves a straight and honest answer. So, why is it that when I’m asked this I shuffle my feet, cough and splutter and feel the perspiration start to trickle down my spine?

My name is Chris Tally Evans and I’m a freelance artist. See? I’ve got myself in a knot already. The word artist has probably conjured up an image of white studios and oil on canvas, but trust me, I can’t paint for toffee!

So what do I do? Well, we’ve just been fixing my latest project’s website which had inexplicably changed its font into Times New Roman and decided to hide half the functions. I say we’ve been fixing it because as a person with a visual impairment I use a Personal Assistant (PA) to help me overcome some of the barriers that make life challenging for disabled people. I’ve been using a PA for over 20 years now and I think without one I wouldn’t have been able to carry on working. 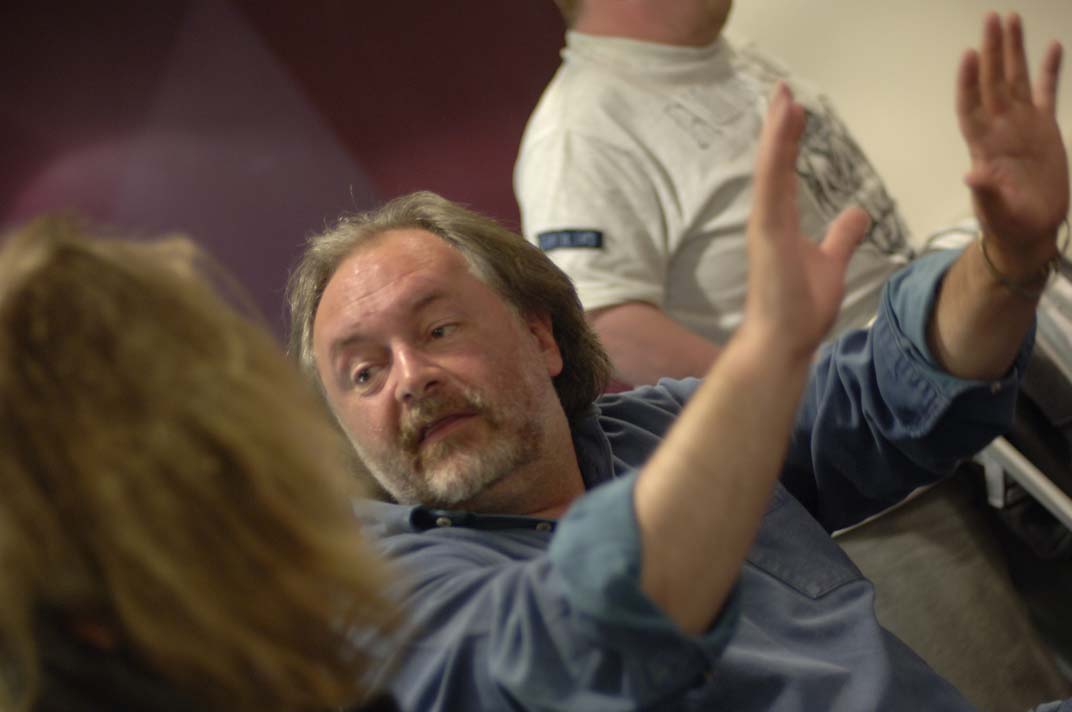 I started working life as a non-disabled person, struggling as actor and musician. In my late twenties, I discovered that I had an extremely rare congenital eye condition that means part of my central retinas no longer reflect light. So, now I see the world like an impressionist painting, a Van Gogh, a Turner. This can be beautiful, but can also be a nuisance when you’re at an airport and you can’t see whether your flight’s up on the overhead monitor.

My work has covered different strands in the arts: actor, musician, theatre director, writer, digital storyteller, radio programme maker. I’ve also written articles and edited disability arts magazines and have been active in the disabled people’s movement here in Wales where I live.

But what connects all of these varied roles is that they’re all about stories and finding different ways of telling them. Coming to terms with life as a visually impaired person has been one of the driving forces that have kept me working. In a large part it’s been about refusing to lie down and be helpless or conform to a stereotype. And that, I think, has helped me have the success that I’ve achieved.

Recently, that success was in the form of Turning Points, an Unlimited commission for the Cultural Olympiad, the arts festival surrounding the London 2012 Olympic and Paralympic Games. Turning Points is a collection of life changing moments from people of all walks of life. The oldest person to give me a story was 90, the youngest 11, and I even had a story from Hollywood legend, Sir Roger Moore. Six of the stories have been woven together into a 10-minute film that was screened at Chapter Arts Centre, Cardiff, and the Festival Village Cinema at London’s Southbank Centre.

But this hasn’t been my only project. I started out by being very interested in improvised theatre. The first company I founded, Theatre Addix, tried to do for theatre what punk rock was doing for music. I’m not sure we succeeded but it was a lot of fun. However, as I get older – I’m now fifty and it makes me laugh that I’ve officially entered the realm of the grey pound – I’m increasingly inspired by the countryside where I live.

A couple of years ago I was lucky enough to make a series for BBC Radio 4 called my Mile of the River, which took an in-depth look at a very small stretch of the beautiful river Wye that flows just 50 yards from my cottage. It took a year to make, off and on, and was just about the most rewarding thing I’ve ever done because it dealt with the people and places that mean a lot to me. We weren’t trying to please anybody else, just make something that showed how wonderful a river, its history and those that share in it, can be.

So what I actually do varies hugely from day to day; one day it may be recording sound or images, another day it might be working with actors, or maybe stomping around my living room trying to sort out my own performance. More than often it’ll be the business of trying to get funding, putting together budgets and proposals (many of which come to absolutely nothing) or working on publicity to try and make sure my latest piece of work doesn’t go unnoticed.

At the moment I’m trying to secure funding for a theatre project whereby I want to work with other visually impaired actors and musicians to create an ensemble theatre piece based on our life experiences and personal stories; it’s something I’m really excited about.

Looking back at what I’ve just written for Disability Horizons, it strikes me that it’s not much easier to write about what I do than it is to talk about it, as either sounds as if I’m showing off or apologising for what I’ve done and I don’t really want to do either. Perhaps it’s better to let the stories and the works speak for itself. If you’d like to find out more then visit my website. You can also take a look at a snippet of the Turning Points piece and learn more about what inspired me:

• Differently abled through digital art.
• Viewing disability and difference through the eye of a lens.
• The British Paraorchestra: recruiting new talent.

Don’t forget to get in touch by emailing us at editor@disabilityhorizons.com, messaging us on Facebook, tweeting us @DHorizons or leaving your comments below.

IMPORTANT NEWS: #facemasks are now mandatory in shops as well as on public transport. But there are exemptions for some conditions. Find out more & buy our exemption card so you don't get fined. https://disabilityhorizons.com/2020/06/face-mask-exemptions-how-to-ensure-you-dont-get-fined/ #facemaskshop

Bikeworks' All Ability sessions in London is at risk of funding being stopped due to the pandemic. For many disabled members who regularly attend, including one of the @DHorizons Team, will miss being able to get out & enjoy cycling while keeping active.
https://www.bikeworks.org.uk/Pages/Category/what-is-all-ability