We’ve set music writer Meghan out to interview leading disability musicians to find out how they got into music, how their disability affects their performances and how accessible concert venues really are. This week, she talks to Ally Craig from Bug Prentice…

Music is supposed to take you away from everything: your thoughts, enemies, and sometimes even your disability. Music doesn’t judge a person by what they can do or hear, or by what they can feel through their body, for those who have hearing issues.

For people, like me, with a disability that affects mobilty or dexterity, being able to find instruments to play “correctly” is a challenge, but it’s not impossible.

We’re used to seeing a person have their guitar at their waist and playing it from there. But what Ally Craig from Bug Prentice, who has Muscular Dystrophy, does is very unique and shows what is possible. He still has the guitar at his waist like everybody else, but his guitar is laid out on his lap. It’s fascinating to see something like this. I’ll be honest, I am rarely surprised by what other disabled people can do, but this one stunned me!

I got a chance to talk to Ally a couple of weeks ago and I have to say, he has such a strong personality. You can instantly tell that he cares about his music and wants to see a change to venues to be more wheelchair friendly, particularly around Oxford where he plays a lot.

Can you tell me a little bit about yourself?

I’m a guitarist, singer, and songwriter based in Oxford, England. I was born with Muscular Dystrophy, and have used a wheelchair for as long as I can remember. It makes my guitar playing technique a little unorthodox – I play it flat across my lap, pressing down on the strings almost like piano keys.

What made you decide to become a musician and create a band?

I don’t really remember making the decision, but I’ve just always wanted to be musician. My parents say I was singing before I could speak.

I joined my first band in secondary school, but we disbanded when everyone else moved away to different universities. I spent a few years after that playing solo gigs around Oxford, but decided to form Bug Prentice because I found it boring and lonely not having collaborators. I love music that surprises me, and it’s a lot harder to be surprised by yourself!

What made you choose to play the guitar as well as sing? Is the guitar the only instrument you can play?

Songwriting was always what I wanted to do, so learning an instrument went hand-in-hand with that. I briefly took tenor horn lessons at the age of 7, then moved onto keyboard, which is where I wrote my first few songs around the age of 9 or 10.

I eventually settled on guitar by the age of 12. I’ve since forgotten all my horn lessons, but I still occasionally plink away at the keyboard. I enjoy playing the bass guitar too, a few of my songs originated from that rather than guitar.

Who are your muscial influences?

Aside from my formative years, which were dominated by The Beatles, the music I make these days is influenced by all kinds of stuff. I discovered Cardiacs in my early twenties, and the sheer unpredictability and creativity of Tim Smith’s songwriting really opened my mind to the possibilities of music.

The guitar noise of Sonic Youth and Shudder To Think also has a lot to answer for. Then there’s the angular beauty of Thelonious Monk, the melancholy surrealism of Ivor Cutler and Robert Wyatt… Basically anything I like gets thrown into the blender and perhaps it comes back out in my songs.

What inspired you and your bandmates to make The Way It Crumbles album?

The songs that make up the album were written over a period of about 7 years. The album itself is just a collection of the songs I hadn’t gotten sick of yet! Although I hope it all works together in sequence anyway. 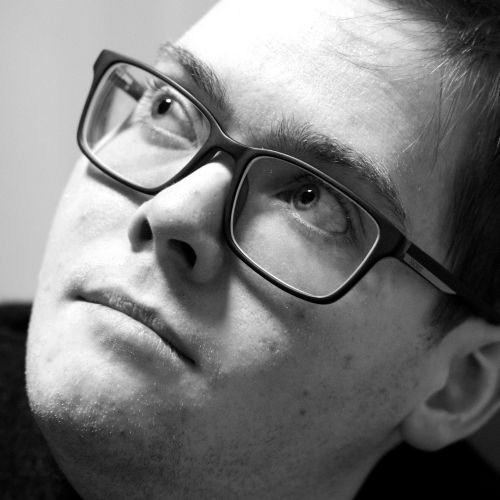 Do you believe that getting a music degree is helpful for those wanting to have a career in music, particularly when it comes to the business side of it?

I’m not really qualified to comment on that – I didn’t study music at university, and my A-level results were less than impressive! I’m not business minded in the slightest. It depends on your approach to formal education and your approach to music as to whether or not that’s the right path for you.

On your website, you say that all venues need to be wheelchair accessible. Have you ever came across a venue where it wasn’t?

The number of inaccessible venues in Oxford alone is deeply frustrating to me. There are lots of little venues in basements or up steep flight of stairs – awkward to access even if you don’t have mobility problems!

Attitude Is Everything is a fantastic charity that works to make music accessible for deaf and disabled punters and musicians, and they’ve been responsible for vast improvements in recent years. But there are still plenty of inaccessible places – especially if you’re interested in smaller, weirder, more obscure music.

What are some of the changes you think need to be made so venues are more accessible?

As a wheelchair user, obviously ramps are my biggest concern. So many places could be made wheelchair accessible with a simple, portable ramp and a doorbell to ring for assistance. People who run venues, shops, and other public places should remember that if we can’t get into your place, or if we don’t feel safe and welcome, we can’t give you our money. Sort it our already!

Do you have any goals for 2016 for yourself and Bug Prentice?

We’re planning to learn and record some new songs very soon. Hopefully it won’t take us long to get them done and released.

Do you have any advice for those who use wheelchairs or crutches and that want to be musicians someday?

As Kurt Vonnegut once wrote: “Practicing an art, no matter how well or badly, is the way to make your soul grow. For heaven’s sake, sing in the shower. Dance to the radio. Tell stories. Write a poem to a friend, even a lousy poem. Do it as well as you possibly can. You will get an enormous reward. You will have created something.”

It’s true. If you want to be creative, you can find a way. Use any instruments, technology, or bric-a-brac available to you. If you can’t play an instrument in the conventional way, try an unconventional way. Experiment. Collaborate with like-minded people. If you’re just starting out, it might (probably will) sound bad. But do it anyway, for the sheer enjoyment of doing it. And the more you do it, the better you’ll get.

You can read more of Meghan’s articles by visiting her blog, Got Meghan’s Blog.

Many people need urgent access to a toilet while out and about due to a disability or health condition. Here at the @ShopDHorizons, we sell a range of portable urinals and sick bags that can ease the pressure of needing to get to a toilet. 🚾♿️

The Guardian newspaper are looking for disabled people to share their experiences of navigating the streets as lockdown restrictions ease further.

Tell us: what are your experiences of access on the street as a disabled person?

Pavements and streets in the UK have become more crowded since the coronavirus restrictions lifted. Has this made them more difficult for you to navigate them?
View on Facebook
· Share