We don’t think that there are enough books with disabled characters as the hero or heroine, or where disability is central to the storyline. So, we’ve decided to create some of our own.

Disabled writer Hayleigh Barclay and disabled illustrator Philip Hoare have come together for Disability Horizons to create a series of short stories and drawings where a disabled person is the lead. The third, Office Politics…

“What do you mean we’re having an inspection?” said Erika.

“There’s been a complaint made against us,” Paul replied, placing a pile of documents in front of Erika. “We’ve been accused of not hiring non-disabled people.”

Erika lifted the paperwork and threw it in the bin.“This is nonsense!”

Paul opened his iPad and scrolled along the screen. “I’ve been looking at our employee records and we hire over fifty people and all of them have a disability.”

“You even requested that the Santa at last year’s Christmas party be paraplegic.”

Erika rolled her eyes. “This is political correctness gone mad!”

Paul manoeuvred his wheelchair beside Erika and handed her the iPad. “And let’s not forget this email to Gillian when she put a teddy bear – a  gift from her five-year-old daughter – on her desk. “

Paul sighed. “You told her to either rip out one of its eyes out or put its leg in the shredder.”

“I didn’t think she would actually do it,” Erika said, handing back the iPad. “So, what do we do?” 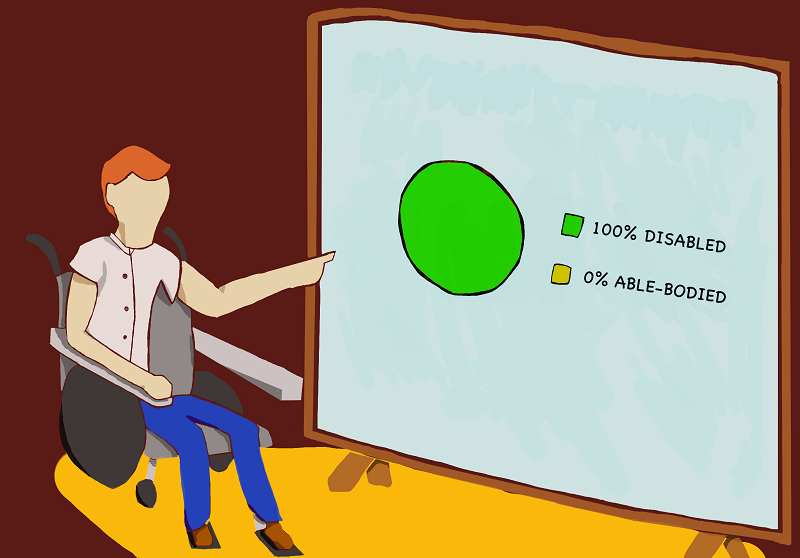 It had taken precisely half an hour for word to spread around the office about the impending inspection. In that time, whispers turned to gossip, which turned to full-blown hysteria. People feared tearing down walls to install able-bodied bathrooms, having to find space for non-disabled parking bays, and the possibility of Erika going to prison for breaking discrimination laws.

“You can’t go to jail,” Stacey said, welling up. “Someone might make you their bitch.”

Erika looked at the faces staring at her around the table. “That’s why I called this meeting. We need a plan.”

“This is all we need!” said Alice, taking a bite out of her caramel shortcake. “Do they really expect us to hire someone based on their physicality?”

“Yes. They want them off of benefits,” Erika replied, screwing up her nose.

“I don’t even know how to talk to them,” George signed, glaring at Erika. “I blame you for this! You never gave us able-bodied awareness training.”

Paul handed round a set of leaflets and began typing on his iPad. “It’s going to be fine. These guidelines state the ways we can improve our policies.”

Reuben ran his fingers over the braille lettering and snorted. “What the hell are reasonable adjustments?”

“It probably means we need to start serving avocado on toast for lunch,” Stacey said, still sobbing her heart out.

“It’s the same thing,” Stacey added, blowing her nose. “They’re just trying to be cool. BUT THEY’RE NOT LIKE US!”

“No, she’s right,” Erika interrupted, grabbing her crutches and rising to stand.

“They may never be as good as us,” Erika continued. “And we will never give into them.”

The music continued, louder and louder.

“I say let this inspector come,” Erika said pounding her crutch on the floor. “But they will not defeat us!”

As Erika addressed each face staring back at her, the music filled the room as though to say: “I believe in you, Erika.”

“Nothing will bring this company to its knees – not even the government,” Erika added. “And will someone please answer that goddam phone?”

Alice leaned over to the table behind her and as she pressed the mute button on the phone, the music stopped.

“Basically we need a plan,” Erika said, sitting down. “Can anyone pretend to be non-disabled?”

Paul grunted. “Are you serious?”

“I’m dyslexic,” Alice said, riffling through the leaflets. “Does a hidden disability count?”

Everyone around the table groaned. “Oh here we go!” said Stacey.

“We’re not doing this again,” Paul replied, holding his hands up. “We are not playing who is more disabled.”

“Can we just focus,” Erika interrupted. “It’s just a little bit of acting. And you know appraisals are coming up soon – maybe even a promotion.”

Reuben cleared his throat and drummed his fingers across the table. “I’d happily do it. Personally I think I deserve a promotion after sealing the Mackintyre account.”

“Really?” Alice replied, almost choking on her caramel latte. “Don’t you think the white cane and the dog will give away you’re disabled?”

Reuben leaned down to stroke the ears of the golden Labrador lying at his feet. “Don’t listen to her, Bernie. She’s just jealous.”

George banged his fist on the table. “Enough,” he signed. “This is getting us nowhere.”

One by one, each person around the table yelled at the others, creating a commotion of insults and biscuits being chucked across the room.

Amidst the noise, Erika looked around her team – Paul with his wheelchair, Stacey with her amputated arm, and Reuben signing the most obscene of profanities. Erika stood once more and clapped her hands trying to get the room to focus.

“Listen, everyone,” she attempted to say over the rabble. It was no use. Leaflets were tossed in the air and coffee flew across the table and splattered up the walls.

“LISTEN!” she screamed, causing everyone to turn to her. “I’ve got an idea. But it’ll take teamwork.”

A chocolate digestive hit her on the forehead.

“Right this way, Mr Johnstone,” Erika said, guiding a man attached to a briefcase through the lobby.

Erika flashed a smile and let out a girlish giggle. “I don’t know what all this nonsense is all about,” she said, walking through an automatic door. “As you can see, most of our employees aren’t disabled.”

To anyone looking, the office appeared to be exactly the same as always – and it was. Just with a few reasonable adjustments.

Paul sat at his computer typing numbers into a spreadsheet. From behind a glass partition, Reuben and George were reading brochures. And Stacey stood at the photocopier with her arms folded.

“Erika!” Alice called, swaggering across the floor like it was a catwalk.

“Look!” Erika said turning to the man and pointing at Alice. “Her legs work. She’s fine.”

“Ms Anderson!” the man gasped taking a file from his briefcase. “Our records indicate that none of your employees are non-disabled.”

The man sighed and shook his head. “What about those gentlemen through there,” he said pointing to Reuben and George, “Can I speak to them?”

Erika bit her lip. “Unfortunately that is a soundproof room – they definitely won’t be able to hear you.”

“It’s confidential,” Erika replied motioning for the man to join her in the kitchenette.

The man stared at Reuben and frowned. “Why is he wearing sunglasses indoors?”

The man looked at her and there was an awkward pause. Erika handed him one of the mugs. “We don’t discriminate here. Sugar?”

The man took a swig of the dishwater-masked-as-tea and gagged before turning his attention to Paul. “Excuse me,” he said standing beside the wheelchair. “Would you call yourself disabled?”

The man sniffed, unimpressed, and looked up and down the wheelchair.

The man knelt down to look under the desk.

“What on earth is this?” the man said, pushing Paul’s chair backwards. “Why do you have newspaper wrapped around your leg?”

Paul eyed Erika in desperation and muttered. “It’s an artisan print to go over the plaster cast.”

“And the sellotape?” the man replied.

“They’re very authentic,” Erika laughed. “You should see the crossword.”

The man glared up at Erika, removed a pen from his jacket, and pointed it at a headline: Turnip or Swede – The Debate Continues. “It has today’s news.”

The man rose to his feet and was just about to speak when a deep, almighty, “Woof!” came from behind the glass partition.

“What was – “ the man said, spinning around to locate the sound.

Erika let out a series of over-exaggerated coughs. “Sorry, the aftermath of the flu.”

The excuse was both unconvincing and pointless as, two seconds later, the labrador wandered into the office wearing his fluorescent yellow coat.

“A guide dog?” the man said, narrowing his eyes.

A bead of sweat trickled down Erika’s forehead. “No… He’s just very fashion-conscious.”

“Ahhhh!” came Stacey’s voice from across the office.

Erika and the man rushed over to find Stacey wrestling with the upper lid of the photocopier.

“It’s got my arm!” she squealed, accidentally leaning against the enlarge button. “Do something!”

As the man stepped forward to grapple with the overly aggressive piece of machinery, masses of paper hit him in the face. Erika, on seeing the pile of prints floating to the floor, attempted – in vain – to pound her fist into the off switch.

The man ripped the plug from the socket, straightened his tie and held up a photocopy of an arm missing part of its limb. “It’s too late, Ms Anderson. I’ve already seen it.”

The man sighed. “Are any of your employees actually non-disabled?”

“Okay, have it your way,” the man replied, walking towards Paul. “Did you break your leg?”

As pieces of newspaper unravelled to expose a perfectly good – if not hairy – leg, Erika gave an indignant sniff. “Put your leg away, Paul,” she said. “You don’t have to explain yourself to anyone.”

“Ms Anderson, you are breaking the law!” the man said, picking up his briefcase to remove a large red file. “I will have to report this.”

“No, no, no!” Erika yelled, watching the man click his ballpoint pen. “See?”

Slowly, she removed her left arm from its crutch and stepped forward.

Ignoring him, Erika removed her right arm from its crutch and took another step forward.

“Look,” she said, smiling and wobbling. “It’s a miracle.”

She plummeted to the ground.

The office fell silent for several moments with everyone pretending they hadn’t noticed. Everyone that is except for the man, who found himself unable to blink and was staring at the pile of blonde hair and Chanel suit collapsed on the floor.

The man nodded and backed out of the doorway. “I’ll be seeing you, Ms Anderson,” he mumbled.

Erika raised her arm and gave him the middle finger.

Words by Hayleigh Barclay and illustrations by Philip Hoare

Disabled contestants competing on Strictly and Bake Off 2020

Representation of disability in popular culture in 2020 – where are we now?

Disabled contestants competing on Strictly and Bake Off 2020

Representation of disability in popular culture in 2020 – where are we now?

10 celebrities who have struggled with mental health

45% of disabled people we surveyed with @DHorizons had experienced online hate crime since the pandemic. #No2DisabledH8 #NationalHCAW

.@EnvolveWellness empowers people with disabilities or long-term conditions to build strength & confidence with adapted exercises, such as boxercise & dance, in order to achieve better movement & feel socially included. Find out more & get in touch: https://envolvewell.co.uk/ #ad