Our Deputy Editor Shannon, who uses a wheelchair, didn’t think she would be able to participate in able-bodied exercise classes. But she decided it was time to push boundaries by challenging the norm. So she and a fellow wheelchair user tried out a regular Zumba class at her local, mainstream gym. Here’s how you can do the same…

Exercise is good for you, I don’t think anyone is going to fight me on that. I mean, who doesn’t remember this infamous Elle Woods quote from Legally Blonde?

But seriously, it is. Healthline says that exercise:

That’s why I’ve been exercising since I was young. But, at all of the places I have exercised, the staff have been experienced in working with disabled people. In addition, they’ve all been one-on-one sessions with a trainer or therapist.

So what about exercising in regular gyms with non-disabled people? I always envied my able-bodied friends’ ability to go to a mainstream gym. They’re able to use all of the machines, join in with the large selection of fitness classes and not be stared at.

Could a wheelchair user do Zumba?

Out of all of it, there’s one class in particular that I’ve always longed to try… Zumba. I’ve seen people taking the class and have been drawn to the high energy and smiles on their faces as they’ve moved in time to the upbeat music.

The more I thought about it, the more I wanted in. Just because a class hadn’t had a participant in a wheelchair before, didn’t mean that it was impossible for me to join. It is time to push society’s boundaries and for the fitness world to be more inclusive of people with all abilities.

But I wasn’t ready to tackle this venture alone. And, luckily, I didn’t have to. I went to visit my friend Deb, who also uses a chair, and told her my idea.

“We should take a Zumba class together,” I said, nonchalantly.

“YES!” Deb replied, “I was just thinking that I want to get fit but I don’t want to do it alone.”

And so, our plan was set in motion – there’s was no turning back now.

We found a class at a local LA Fitness gym for later that week and decided to call to give a heads up that two chicks in wheelchairs would be rolling in.

I made Deb call because, as a typical millennial, I have a fear of talking on the phone.

“Hi, I was just calling about the Zumba class on Thursday night,” Deb said. “My friend and I are in wheelchairs and we want to come to try it out.”

“Um… sorry, can you repeat that?” the man said nervously. He sounded as though he thought we were pranking him.

Deb laughed and tried again. “My friend and I are in wheelchairs and we want to come to do Zumba! We just wanted to call to let you know and to make sure that we’ll be able to participate.”

He responded tentatively: “Well, we have an elevator, so you can get up to the studios, and it is all flat once you get up there.”

Not exactly the enthusiastic response we were looking for, but we thanked him and said we would see him on Thursday.

When Thursday night rolled around, I had a moment of panic. What did I get myself into? I tried to convince Deb that we should go on a different day. But she was having none of it.

We made our way inside and up to the studio, where a room full of people were already warming up to Wake Me Up Before You Go-Go. We got a few stares as we rolled in, so decided to stay toward the back of the room so that we would draw less attention to ourselves.

We began to move to the music and followed the teacher’s instructions with our arms. It was all going pretty well until people began to move up and down, side-to-side, and then do 360 degree turns.

It was difficult for us to do the dance moves whilst also moving our chairs. So, for the most part, we stayed in one place and did as many of the other moves as we could.

It also became tricky when a lot of them involved just leg movements. It was rather uncomfortable, but we tried our best to adapt to what we could do with our arms and just had fun with it.

About halfway through the class, we were summoned to the front of the studio. This made me feel even more vulnerable, especially when Deb left the class for 10 minutes to go to the bathroom and get water. But I persevered nonetheless and kept moving until the end.

After the class, people were keen to talk to us. They were curious to know our stories and what made us decide to come. We apparently did a good job for our first time, and got a lot of high fives.

Making fitness inclusive – one Zumba class at a time

This sort of thing is exactly why I put myself in uncomfortable and sometimes scary situations. It is important for society to see disabled people doing everyday things and living fulfilling lives. 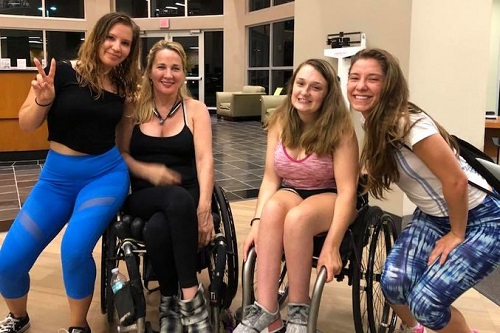 Society isn’t fully accessible or accepting towards disabled people yet, and the only thing that will change that is exposure. We need to be present in the workforce, on public transport and heck, in Zumba classes. This will let the world know that we are worthy of equal opportunities.

We left the class on a high. Deb was so pumped that she joined the gym and signed up for a personal training session for the next day.

The experience overall was very motivating. It not only gave us more confidence in our abilities, but will al hopefully have an impact on how the attendees view and treat disabled people in the future.

Did we change the world? No. But did we start to make an impact on disability inclusion in fitness? Yes. Baby steps, folks, baby steps…

Have you ever attended a mainstream fitness class or been to Zumba? We want to hear your stories. Leave your comments below, message us on Facebook or tweet us @DHorizons.

From London 2012 to Tokyo 2020 Paralympics: Boccia player David Smith in the spotlight

Exercise equipment to help you stay active if you are disabled

Long Covid and ME/CFS: my ongoing battle with both

Using exercise equipment if you have a physical disability

From London 2012 to Tokyo 2020 Paralympics: Boccia player David Smith in the spotlight

Exercise equipment to help you stay active if you are disabled

Long Covid and ME/CFS: my ongoing battle with both

Using exercise equipment if you have a physical disability

Businesses need to do more to make their workplaces accessible.

But there are small things every company can do to make their workplaces more accessible.
View on Facebook
· Share

💪Next up in our Paralympic series of interviews