Come as You Are follows three young men with disabilities as they flee their overbearing parents for a road trip to a brothel in Montreal that caters to people with special needs, in order to lose their virginity and embrace their independence. The film is inspired by a true story and stars Grant Rosenmeyer, Hayden Szeto, Ravi Patel. Read on to hear Kristen Hutchison’s review of the film, who is a writer with Ulcerative Colitis.

I’ve never understood the gravity of representation until now. Seeing elements of my own existence was monumental for me. The first time I saw the film, I sobbed. And needed a lot of tissues to wipe my tears.

In Come As You Are, each character is deeply unique and multi-dimensional. In a feature-length film, how often do you see a group of adult friends, each with different disabilities? Have you ever seen the main character of a film be quadriplegic where the plotline isn’t only about his disability but about his desire to lose his virginity? I haven’t.

Exploring disability and the family dynamic

I’ve also never seen a film where the characters have multiple dimensions instead of just being a ‘disabled person’. I first noticed this with the incorporation of the main character’s family members, a prominent theme being how family members go through their own journeys too. This interwoven theme gave me a glimpse into how a parent and their adult child’s relationship is shaped by their child’s disability. 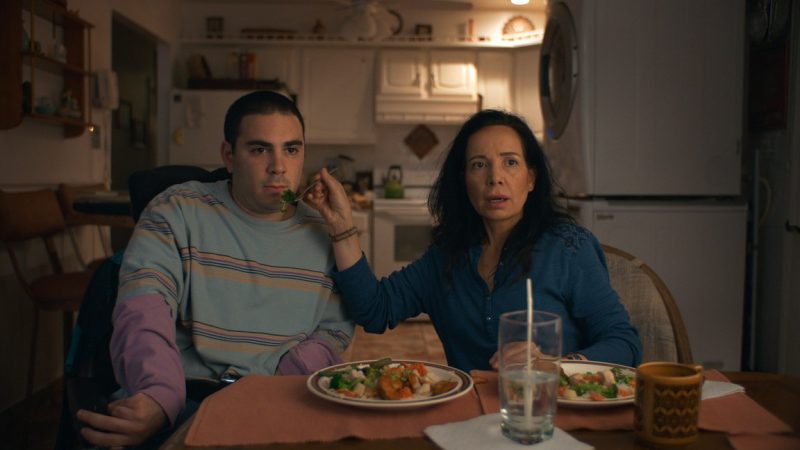 When I watched Scotty’s mom interact with him, I felt like I was given a glimpse into their complex dynamic. I could feel her fear when he left for the Canadian road trip, and while she sat at his computer to watch his rap videos.

The latter scene, in particular, gave me a better understanding of how my parents must’ve felt when I was diagnosed as medically disabled due to my ulcerative colitis.

Scotty’s mom watched his videos intently as if to learn another side of him. The camera focused on her facial expressions and the pure empathy radiating from her eyes. She saw a side that Scotty didn’t show to anyone except those who listened and watched his artistic expression of suffering through rapping.

His words opened a door for her empathy to peer in and see his pain.

This scene also made me realise that even though she was his caretaker, she never really knew her son and what he goes through on a daily basis. This is why Scotty didn’t tell her when he left for the road trip, he knew she would never let him go.

In another pivotal scene, Moe, a man who has a visual impairment, revealed that he’d never gone on a trip without his mom. He’s a grown adult.

I wondered where his mom was in the film, we were never introduced to her. But this also illustrated to me that there are varying levels of involvement with parents, or caretakers, particularly when their adult child lives with a disability or physical limitation.

What resonated the most with me was the feeling of having your physical body limit you to such an extent that you crave the freedom to just get away. As someone with a disability myself, seeing these characters work so hard to take back some freedom was inspiring.

There was also a sense of childhood wonder in the characters as they planned their adventure. Matt was adamant that they were not on a field trip. His anger was palpable. The characters were adults, but adults with limitations that had been placed on them.

The adventure couldn’t be accomplished without a lot of help from able-bodied people. A concept I know very well.

The concept of having an ‘able-body’ is hard for me to define in this context. Throughout the film, Sam, who drove them and helped where needed, appeared to be healthy and without a disability. I connected deeply with her character in a scene where she was taking off Scotty’s shoes before they bed and all of a sudden passed out on the floor.

After the ambulance came and brought her to the hospital, we learned that she has Type 1 Diabetes. She also had a disability, just an invisible one, like me.

‘I know what you’re going through’

This statement was said at multiple points in the film, illustrating the vast array of consequences it can have on an individual. One example was when Matt said to Scotty that he knew how he felt. Both men are wheelchair users. Scotty yelled at Matt explaining that he will never know he goes through and to never say that again.

It’s such a powerful statement because it is all too common that labels are put on others. It’s easy to categorise individuals so that we can better understand them, like these two men in wheelchairs.

This scene showed me that even when people appear to be similar on the outside, they are more than likely experiencing very different realities. Never assume you know what someone else is going through. Until you’ve lived in their body, you will never know.

In another scene, a well-meaning cop they had met said: ‘My cousin’s brother in law has Down Syndrome, so… I know.’ He didn’t know what their individual lives consisted of each day. But, the assumption of ‘getting it’, is a central theme of the film.

By the time the characters made it to Canada, in hopes of visiting a brothel to lose their virginity, their parents had caught onto their plan. I began to weep when Scotty’s mom and Matt’s parents found them at the hotel.

These adult men had once again been controlled by authority, and thus, their disabilities. They were reminded once again that their limitations did, in fact, exist and they could not outrun them.

The concept of what is it to be ‘normal’ was also explored in the film. Scotty, as a disabled man, wasn’t cliqued and glorified at the end of the film. He was a regular guy who enjoys watching wheelchair baseball and simply wants to get laid.

Human needs and urges develop each character into more than just what the viewer sees – they are so much more than their disability.

It resonated with me how similar we all really are as people. It is human nature to want to relate to others. Scotty had a hard time relating to Matt, even though he was also in a wheelchair due to a degenerative condition. But he really wanted to.

Moe and Sam created a relationship, regardless of his visual impairments, and love was found. They could relate to each other despite their differences.

This concept of connection and understanding relates to the power of presence and compassion. Come As You Are illustrated the immense power of simply listening and genuinely hearing one another.

In the film, there were actors with disabilities cast. Maybe not in the main roles, but in supporting roles. In my opinion, the themes in the movie were powerful and presented by the entire cast, disabled or not.

As a person with a disability myself, I did not think about how the casting of able-bodied people was detrimental in any way. The actors were incredible, and what they represented was a huge step forward for disabled-folk communities.

“It just so happens that the lead actors in Come As You Are do an incredibly respectful portrayal. They did all of their research diligently. Once more we have gifted, talented actors with disabilities in the movie.

It’s the perfect mix and I truly believe that this movie is the gateway to open up opportunities to people such as myself with a disability wanting to act more.”

Watch Come as You Are on Amazon, Youtube, Vudu and more. For more information on Kristen and her work, visit her website.

#WheelchairTips for maintenance from @MountainTrike - TIP 3: Clean the frame using a mild detergent. The backrest and cushion should only be cleaned using soap and water. Don’t store your wheelchair then the seat is wet.
https://disabilityhorizons.com/2021/12/top-tips-on-maintaining-your-all-terrain-wheelchair-in-winter/

Throwback - With the new series of the Apprentice underway we take a look back at an article by our writer @P94Emma.

Q. Apprentice candidate Sharma Amin left the show due to a health condition, what reasonable adjustments could have been made for her?