After watching jaw-dropping negativity of disability in a film, our Deputy Editor Shannon Kelly was compelled to write an article exploring the representation of disabled people in films and on TV. Read on to find out her thoughts on a selection of recently featured disabled characters and what their appearance does for society’s view of disabled people.

Representation in the media is important. People from all walks of life deserve to see their stories told on the big or small screen. It is a powerful medium that can either make or break how people feel about themselves and other people around them.

I don’t think I’m alone when I say that the representation of people with disabilities in the media needs massive improvement. The disability community is resilient, loving, powerful and proud. However, TV shows and movies don’t necessarily portray that.

So, I’ve compiled a list of a few examples of people with disabilities being portrayed in the media – and whether they’re being shown in the right way. Read on to see what I think, and please comment below with your thoughts on this hot topic.

Ok, so my first example doesn’t actually have a disabled character. But one scene, with such blatant disability-bashing, prompted me to write this article.

In the predictable high school drama High School Lover, a young 17-year-old girl falls in love with an older actor, but her father disapproves and tries to intervene to break up the relationship.

The storyline doesn’t really have anything to do with disability. But one scene made my jaw fall to the floor in disbelief at what was being said. In the scene, you see the characters playing ‘screw, marry, kill’, where you have to pick what you would do to three celebrities.

In their game, the options were Alex Pettyfer, Miles Teller and Eddie Redmayne. The character named Allison didn’t know who Eddie Redmayne was, so her friend Larry said: “It’s the guy who played Steven Hawking.” Allison then replied: “Well I can’t screw him…. he’s in a wheelchair.” Larry responded: “Not in real life, you idiot.” Eddie Redmayne became the celebrity she chose to “kill”.

It was a very short scene, but it was not the kind of representation people with disabilities need in the media, especially with regards to sex and dating. I suspect most people will watch the movie and not think anything of it.

But, subconsciously, it will reinforce the stereotypes that are already present: -that people with disabilities cannot have sex or be in meaningful relationships. As we all know, that’s completely false. Do I even need to point out the Steven Hawking had three kids!

The fact that Lifetime scripted and filmed that scene, without thinking for one second about the impact it might have on the community they are representing is distasteful. I hope that in future instances its scriptwriters will be more conscious of their decisions.

You may remember the wheelchair user Jessica Lopez in Mean Girls. I am glad that they decided, at least, to include a character with a disability in the movie. But the portrayal isn’t great.

The movie sidelined her to the ‘wannabe’ group, desperately wanting to be like the popular and cool girls, but shunned by them. She also used a folding hospital wheelchair, which just isn’t the reality for the majority of chair users.

There was also a very brief appearance of a girl with dwarfism, also firmly ousted by popular teens.

These portrayals of disabled people aren’t great. But I’m not going to get too up in arms about Mean Girls because the entire movie is about dramatized stereotypes. However, I still think Hollywood should try harder!

The Fundamentals of Caring

In this movie, the main character, Trevor, is in a powerchair user and requires assistance from a caregiver. His life in the movie is somewhat sad. He does the same things every day and hasn’t had the same opportunities that most teens have.

However, a new career gives him a new lease of life by convincing his mom to let him go on a road trip. As you can imagine from such a trip, it opens up Trevor’s world and enables him to discovers things about himself and the world around.

This is a coming-of-age movie and touches on the fact that, even though things may be harder with a disability, it is still possible to live a fulfilling life.

I will say, however, that I didn’t like how Trevor’s disability was such a massive part of the storyline. Added to that, the character was played by an able-bodied actor, which is a common issue we’ve seen time and time again.

Speechless is a TV comedy series that follows the life of the DiMeo family. One of the sons, JJ, has cerebral palsy and uses a wheelchair. The show highlights accessibility and disability inclusion issues, but it also touches on everyday topics, such as school, family problems and dating.

The actor that plays JJ, Micah Fowler, is disabled himself, so it certainly is a step in the right direction having someone with a disability playing the role. 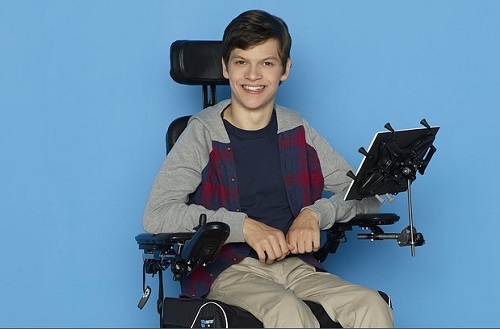 I strongly believe that the media should follow the example Speechless sets for how to portray characters with disabilities in TV shows and movies.

You can also get in touch by messaging us on Facebook, tweeting us @DHorizons or emailing us at editor@disabilityhorizons.com.

Adam Pearson will test his cooking skills on Celebrity Masterchef 2022

Adam Pearson will test his cooking skills on Celebrity Masterchef 2022

Our Pro Sling carry bag is designed to match your chosen sling and is convenient for carrying if you're going out and about @ShopDHorizons.

Throwback - with the new series of Strictly Come Dancing starting in Sept, we share an article by @P94Emma on the winner of last year, @RoseAylingEllis.

Q. Will you be tuning into the new series?

Our Pro Sling carry bag is designed to match your chosen sling and is convenient for carrying if your going out and about.shop.disabilityhorizons.com/products/promove-sling-for-disabled-carry-bag/#disability #disabilityaids #onlineshopping ... See MoreSee Less

The ProMove sling carry bag is the ideal accessory for storing your ProMove sling for someone disabled when not in use and take with you when out and about or on holiday.
View on Facebook
· Share

Rose Ayling-Ellis and her professional dance partner Giovanni Pernice have been crowned champions of Strictly Come Dancing 2021, with Rose becoming, not only the first deaf person, but also the first ...
View on Facebook
· Share

We're looking for a Social Media Manager to run ou

Throwback - To prepare children going back to scho

We take a look back at an article by blogger, @nan

LAST CHANCE to #HaveYourSay on proposed changes to