Jon McVey, who discovered later in life that he has a muscle-wasting condition, recently published his first book, Up Cripple Creek: A Journey to Immobility. Read on to find out how Jon came to discover his condition, how it affects him, and how this led him to write a book.

Publishing my first book gave me quite an adrenalin rush. Getting the first copy in the post was thrilling enough. But when I made the first sale and read the first review, I realised that I could now call myself an author.

Perhaps I haven’t joined the ranks of others who immortalise their lives in print, the likes of Clive James, Bill Bryson (or even Katie Price and the Krankies – who cares?), but it still feels great. So, if you haven’t already done so, I’d recommend that everyone should write a book.

My life has gone in many directions. A few were planned and worked out, and many others were unexpected. At the end of the day, I am very lucky. Despite many dumb decisions, my life has turned out pretty well.

However, my plans never included using a wheelchair. It wasn’t even part of plans B, C or D. Perhaps it was an eventuality that was worthy of some consideration.

I’ve thought many a time about how I would spend the money if I won the lottery. Half would be spent on self-gratifying, high living and profligate hedonism, and I’d probably blow the remainder.

However, if I had played every lottery game for 60 years, there would still only have been one chance in 2,000 that I would have won big. Compared to this, there was about one chance in a hundred of needing to use a wheelchair.

For the first 40 years, the odds were in my favour – or I thought they were. I didn’t know it, but many years before this, my destiny had already been set.

Deep in my muscles, something had triggered a chain reaction of proteins and biochemicals that were gradually eroding my muscle cells. This was happening without any awareness on my part. Even when some symptoms were apparent, they didn’t seem significant.

Then one day, while taking my daughter Emily to school, I noticed that I had grown a pair of clowns’ feet. As I stepped out of the car, pains shot through my feet as if a size-36 foot had been squeezed into my already oversized size-12 shoes. So I went to my GP.

Two years later, my wife and I sat in a small consulting room with a consultant neurologist. He was an amiable man with the ability to put us at ease with a casual joke and an air of professional competence.

“I can tell you what you have. The good news is that it won’t kill you… but it will be a pain in the arse. A real pain!” he said.

I now know that I have a muscle-wasting condition called Inclusion body myositis (IBM). It is one of numerous neuromuscular diseases, all of which are rare and generally known as muscular dystrophy.

Apparently, my condition, like some others, is technically not a dystrophy because it differs at a cellular level, even though it has similar symptoms and outcomes.

Anyway, the upshot is that my muscles are very slowly wasting away. The fascinating thing is that they are affected at different rates, so how it affects my life also changes over time.

My condition progresses over many years, so I know that next year I am likely to be much the same as I now, apart from some adaption or a new way of doing things.

I can walk, but I can only manage a few paces now with a frame. Still, it is enough to make life considerably more manageable, although most of my life is in a wheelchair now. At least it means I don’t fall so often!

My family have been the unintentional partners on my journey. My wife Diane, as well as being a constant support, has had to pick up the pieces when I have fallen, sometimes literally. She also has kept me laughing throughout.

My children have grown up with my mobility becoming progressively limited. They have also learned a sort of resilience through being young carers at times, and managing situations with a calmness beyond their years. 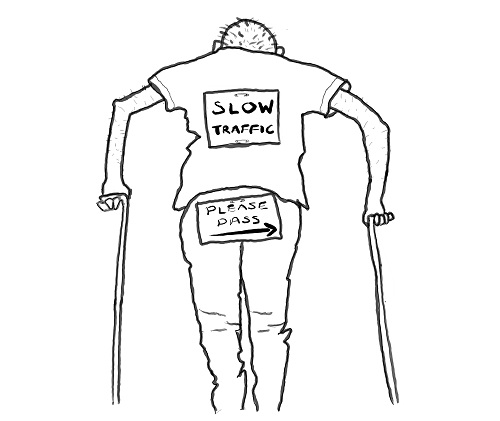 Writing a book about my disability

I have tried writing a book before. In fact, I have a list of storylines for brilliant books. Well, they always seemed brilliant. But by the end of the first chapter, I’ve always realised that my original plot seems strangely similar to some mini-series I’ve been watching.

The spark that ignited the ‘Up Cripple Creek’ project occurred when I visited my local GP. I was grateful for the help of an old lady who had asked her young granddaughter to open the heavy entrance door for me.

It was a genuine moment of kindness that was perfectly judged. Yet, the old lady’s instruction included one word, just one, that seemed so uncomfortably incongruous. “Darling, please open the door for the nice cripple.”

It made me spend the rest of the morning chuckling to myself. Cripple! I’d not been called a cripple before. Perhaps I should have said something. Should I have been offended? But at what exactly?

Although it wasn’t a word that I would be comfortable using, I had no idea why. So that afternoon, I searched the internet for facts about the word and wrote about the kind, old lady.

I didn’t have a purpose in mind, but gradually I collected stories of similar incidents. When you are disabled, funny things happen to you. After all, the real world was designed around the needs of people who don’t have any problems with hand-brakes, upstairs toilets, kerbs, changing their socks or even picking things up.

It didn’t take long before I had enough stories for a book and, as I love drawing, I decided to sketch a cover picture and headers for each chapter.

So far, I have had some lovely reviews of the book on Amazon. Perhaps people are just being kind. But some say they identified with many of the stories and laughed at the same things, even out loud. That pleases me.

The best thing for me were the responses from my wider family and friends. The book opened conversations about previously-unspoken issues, such as depression and mental health.

The direction of my life’s journey has been unexpected, but I might as well enjoy the ride. I think I will write a second book. I haven’t got a plan – I’ll make one when I’ve finished, but I’m writing.

Whether or not anyone will want to read it, I don’t know, but there are always funny things to write about when you’re disabled.

Up Cripple Creek: A Journey to Immobility is available in printed and e-book formats on Amazon, as well as free on Kindle Unlimited.